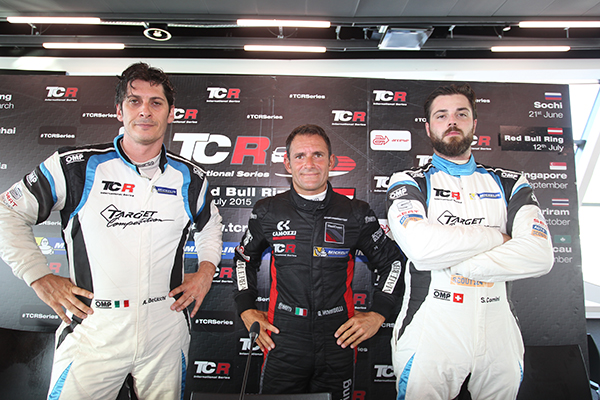 Race 1 - What the drivers had to say

Gianni Morbidelli, winner: “I am very happy with this win and the points I scored. It has been a tough and exciting race. I hope the spectators have enjoyed it. Again, my start was poor but I was able to come back later. Conditions, at this early time of the day, were similar to yesterday morning, with not much grip, especially on the rear. Throughout the race, things improved and eventually I could retake the lead. It was a good fight with Comini and it’s true, I couldn’t avoid touching him slightly in turn 3 at the beginning of the race, but he did not lose the lead at that time. That’s touring car racing, and this is not a simple track, where managing braking is not easy.”

Stefano Comini, second: “The Honda was very fast and consistent here, I tried to be tactical, but it was difficult to stay in front. On top of that, Morbidelli hit me in the back at the beginning of the race and a few more times, which significantly affected my car’s performance in the closing laps.”

Andrea Belicchi, third: “All in all it was a good result for me, starting from P7. The car was very good but I still had too much oversteer in the fast corners. Morbidelli touched me at the beginning, but otherwise I could stay away from trouble and keep Oriola behind. There was a lot of hard fighting around me, maybe too much.”