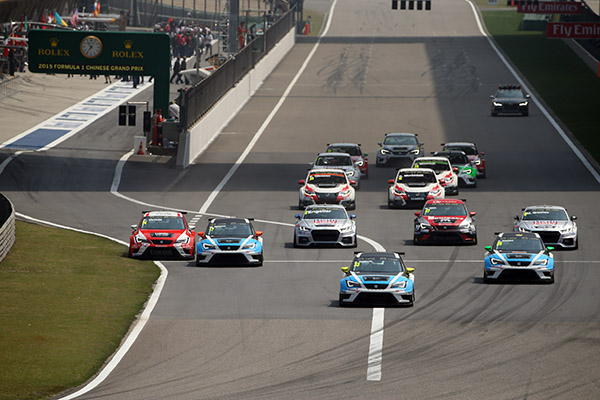 The SEAT León cars took their revenge in a thrilling a very entertaining Race 2 today at Shanghai, with Andrea Belicchi conquering his maiden TCR win after an intense and beautiful fight with team mate Stefano Comini (signing a 1-2 for Target Competition) and yesterday’s winner Gianni Morbidelli, at the wheel of the WestCoast Racing Honda Civic.
With a brilliant start, Comini took an early lead ahead of Belicchi, before both being passed by Morbidelli charging from the back in lap 6, not without a slight contact between the Italian and the Swiss, which Belicchi used to take the lead. It looked as ‘Morbido’ was on his way to a second triumph but his engine switched off briefly two laps later leaving him in fourth. The Honda could pass Oriola and also Comini, but two corners from the end, the Swiss regained second with a great move.
It was a close and hardly-fought race at all levels of the ranking, with Oriola finishing fourth ahead of Nykjaer, Gleason and Engstler. Lorenzo Veglia was elected “Man of the Race” after an intense battle throughout the race, first with Gleason and then with Afanasyev, the young Italian eventually finishing eighth.
In the championship, Morbidelli is leading by a mere 2-point advantage on Comini, with Belicchi third 13 points from the top.
The TCR International Series will resume for Rounds 5 & 6 at Valencia, Spain, on May 3rd.

Key moments
Start – Belicchi takes a good start from pole, while Comini and Oriola jump ahead of Nykjær
Lap 1 – Münnich skids and drops to the back; Comini overtakes Belicchi and takes the lead
Lap 2 – Morbidelli climbs to fourth passing Engstler and Nykjær
Lap 3 – Grachev and Tóth make contact while fighting for seventh, Grachev stops onto the gravel trap; Oriola overtakes Belicchi for second; Engstler overtakes Nykjær for fifth
Lap 4 – Belicchi retakes second from Oriola; Oriola loses third to Morbidelli
Lap 5 – Morbidelli overtakes Belicchi for second; Engstler drives wide at the last turn
Lap 6 – Morbidelli hits the back of Comini’s car and takes the lead; Comini drops to third; Veglia and Gleason have a close fight for eighth
Lap 7 – Nykjær overtakes Engstler for fifth
Lap 8 – Morbidelli slows down and drops to fourth behind Belicchi, Comini and Oriola
Lap 9 – Münnich hits Afanasyev sending him sideways and making also contact with Tóth, while Veglia secures eighth
Lap 10 – the fight between Morbidelli and Comini provide the last thrills: Morbidelli overtakes Comini who retakes the position with a great manoeuvre on the last-but-one turn