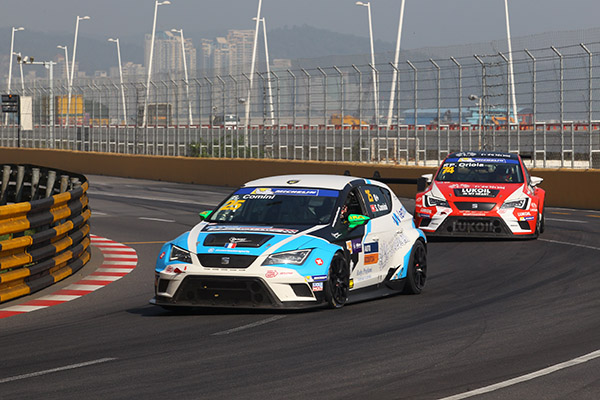 Race 2 – Comini survives pile up to win race and title!

Stefano Comini rounded a perfect Macau weekend by securing the title and taking his maiden win at the Guia circuit. The Swiss racer showed temper and coolness by resisting all the attacks of Pepe Oriola, which included a number of bumps and contacts. The Spaniard’s efforts not only resulted vane, but eventually took a toll on his Craft-Bamboo Lukoil SEAT, which stopped along the track three laps from the end.
The race started in the most spectacular and dramatic way, as the two men on the front row, Rob Huff and Jordi Gené, collided prompting a massive pile-up that left eleven cars out of contention. Only nine made it to the restart, which clearly had the Comini-Oriola duel as the main attraction, and what an attraction it was! Fierce and manly, the duel stayed correct, but nothing could bend Comini’s determination. It was a sad race also for the younger of the Oriola brothers, Jordi, who was bound to a podium finish but had to retire two laps from the end, which gave Mikhail Grachev (Liqui Moly Team Engstler VW Golf) his second podium of the season. Morbidelli (slowed by a drive-through), Ávila (who scored his second victory of the day in TCR Asia), Holland and K. Chan were the other race finishers.

Key moments
Grid - No Race 2 for Nash, whose Ford was withdrawn after suffering from engine problems in Race 1.
Start – Gené and Huff take good start, with the SEAT slightly ahead but there is contact between the two at the first bend, and both hit the wall on the right, initiating a massive accident, with Veglia hitting hard the wall twice and a pile-up at the back. The race was stopped and eventually no less than 11 cars were out: Huff, Gené, Veglia, Gleason, Files, Wong, Choi, Cunnington, S. Chan, Ho and Afanasyev.
Lap 2 – At the rolling restart, Comini keeps the advantage, with P. Oriola trying an unsuccessful move on the outside at the Lisboa braking. There is a drive-through penalty for Morbidelli (grid infringement).
Lap 3 – Morbidelli stops to serve the sanction. Comini leads from Pepe and Jordi Oriola, Belicchi, Grachev, Avila, K. Chan and Holland.
Lap 4 – P. Oriola keeps the pressure, touching Comini’s bumper on a couple of occasions.
Lap 5 – Comini leads on the Oriola brothers, the three being very close. The Swiss pulls slightly away in the straights but seems a little bit slower in the twisty section.
Lap 6 – Again, P. Oriola tries a move at Lisboa on the outside line, but this time there is a clear contact. J. Oriola and Belicchi catch the leading duo.
Lap 7 – Comini pulls slightly away; Morbidelli passes Ávila for 6th.
Lap 8 – More bumping at the Lisboa braking, but this time there is damage on the P. Oriola’s SEAT, who is forced to stop with a pierced radiator, while Belicchi takes second from J. Oriola.
Lap 9 – The younger Oriola is given a drive through for trespassing the white line at pit exit, which gives third to Grachev.
Lap 10 – The race ends with Comini finishing the job ahead of team mate Belicchi.