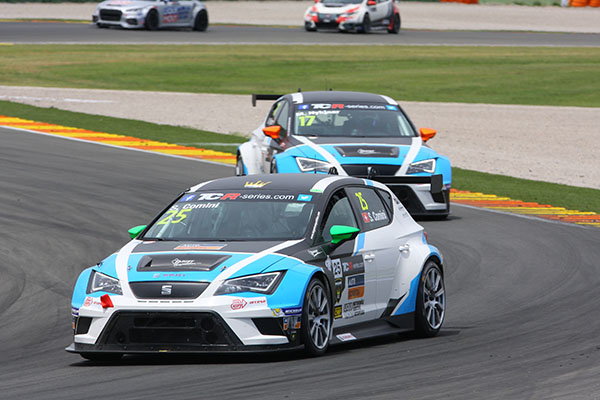 Stefano Comini was the first driver to win a second TCR race in the inaugural year of the series: the Swiss claimed victory in a drama-packed Race 2 in Valencia and jumped back on top of the overall standings. He managed beat team-mate Michel Nykjær, who claimed his first TCR podium, with another Target Competition driver, Andrea Belicchi, crossing the line in third.
The race was rich in incidents from the very start, as Nogués and Morbidelli made contact at the end of the straight, causing an incident that eliminated the Campos Racing Opel and the SEAT of innocent Jordi Gené.
Following a three-lap safety-car period, the race restarted with Comini as a strong leader and a great battle behind him, with Nykjær having to fight hard to keep the opponents at bay. They were first led by Pepe Oriola and then by an amazing Bas Schouten. The young Dutchman, unfortunately, lost a well-deserved podium position in the last lap, when his car stopped. Andrea Belicchi inherited the position, but he is currently under investigation as he did not observe a drive-through penalty. Five other drivers received similar sanction, for overtaking during the safety-car intervention, which added further drama to the race. The WeastCoast Racing Honda cars of Morbidelli and Gleason were lucky, under the circumstances, to finish fourth and fifth.

Key moments
Start – Morbidelli has not a perfect start, which allows Nogués to get the inside line. There is a contact and the Opel skids sideways heading for the wall after collecting Gené
Lap 1 – The safety-car is deployed and in the commotion Engstler and Grachev make contact, with the Russian forced to retire
Lap 5 – The race resumes with with Comini in the lead ahead of Nykjær, Afanasyev, P. Oriola, Belicchi and Schouten; Morbidelli is last after a quick pit stop for repairs
Lap 5 – Oriola passes Afanasyev for third, with the Russian dropping more positions shortly after; Cebrián passes Schouten for sixth. Skuz retires with throttle failure
Lap 6 – There is a big fight between Nykjær and Oriola for second
Lap 7 – Nykjaer and Oriola make contact and Oriola loses the third position to Schouten
Lap 8 – Comini leads on Nykjaer, Schouten, Oriola, Belicchi, Cebrián and Veglia, who has passed Engstler
Lap 11 – Gleason passes Engstler for ninth; Engstler retires with a loss of power
Lap 12 – A drive-through is imposed to Afanasyev, P. Oriola, Belicchi, Cebrián and Veglia for overtaking during the safety car period
Lap 14 – Veglia, Afanasyev, Oriola and Cebrián stop for their drive-through
Lap 17 – Schouten loses third place due to a fuel pump failure; Comini wins ahead of Nykjær  and Belicchi (who hasn’t stopped for the drive-through.