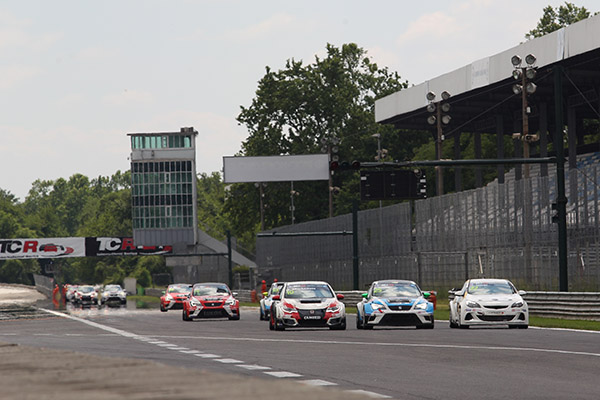 Gianni Morbidelli rounded a great day at Monza, by taking win also in Race 2 and becoming the first driver to win both races of a TCR event. Race 2 was thrilling from start to end, with a great fight and close duels involving Morbidelli, Comini, Gené and Monje, who all led at some point, and Belicchi. With often three and even four cars side-by-side on the straight and diving abreast into the first chicane, the show was superb to the delight of fans present at the Autodromo Nazionale.
Eventually, Morbidelli made the winning move on Comini, who had started last and climbed up in his usual flamboyant style, at the beginning of the last lap, with the Swiss losing a few position in the incident. Second place was for Jordi Gené, while Fernando Monje gave a first well-deserved podium to the Campos Racing Opel Astra OPC after having led for five laps and having performed a great show. Comini and Belicchi took fourth and fifth, with the last points going to Szabó, Veglia, Grachev and D’Amico.

Key moments
Grid – The cars of Nykjær and Afanasyev are not repairable, while Grachev (who had pole for Race 2) starts from the pits and Comini from last row; this means that D’Amico and Gené are in first row, in front of Skuz and Monje
Start – Gené takes the best start with D’Amico touching Belicchi and hitting the barriers at the first chicane; Monje and Oriola make contact
Lap 1 – Gené is in the lead but under attack from Monje; behind them are Belicchi and Morbidelli who have passed Skuz
Lap 2 – At the beginning of the lap Monje passes Gené and takes the lead; Belicchi is third followed by Morbidelli, Skuz and Comini
Lap 3 – Morbidelli takes third from Belicchi, while Comini and Oriola pass Skuz; Comini also passes Belicchi; there is a big fight for seventh between Skuz, Gleason and Veglia
Lap 4 - Morbidelli passes Gené at the Roggia and is second
Lap 5 – Monje resists well to Morbidelli with Gené, Comini, Belicchi, Oriola and Gleason right behind
Lap 6 – Comini and Belicchi pass Gené; Morbidelli touches Monje at the Ascari, but Comini sneaks in-between the two at the Parabolica
Lap 7 – Monje, Morbidelli and Comini get side-by-side to the first chicane, with the Honda touching the SEAT which cuts the chicane and takes first; Oriola goes off-track at Lesmo and retires
Lap 8 – Gené, Morbidelli, Belicchi and Monje are side by side on the straight, with Gené taking the advantage and moving up to second
Lap 9 - Monje lifts-off on the kerb and hits Belicchi
Lap 10 – Great fight between Comini and Morbidelli for first, but the Swiss keeps the advantage; Belicchi drops to sixth behind Skuz
Lap 11 – Morbidelli passes Comini at the end of the straight, with the Swiss trying to respond by taking the outside line at the first chicane; there is a contact and Comini spins and nearly hits Gené; Morbidelli wins ahead of Gené, Monje, Comini, Belicchi and Skuz