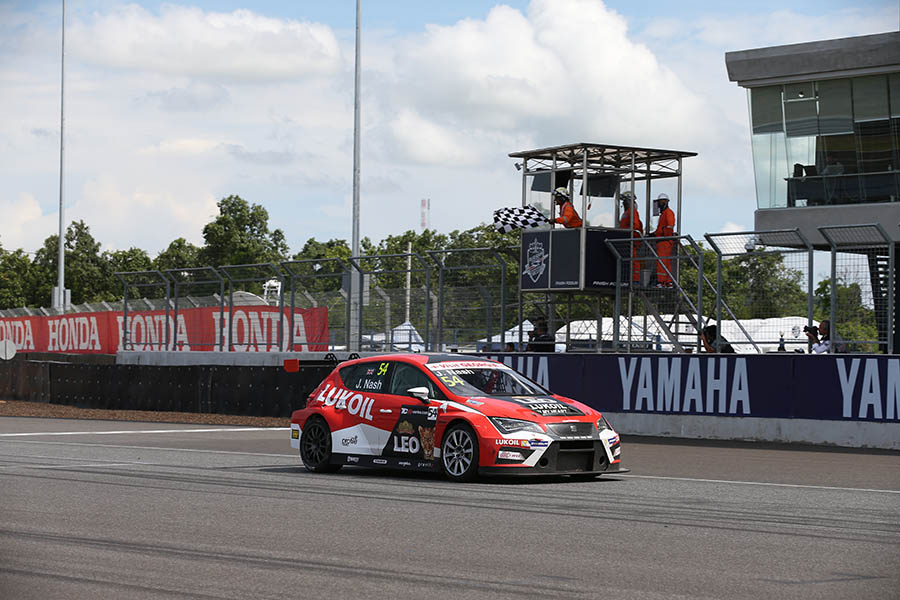 The second race at the Chang International Circuit was plenty of drama, starting with the crash that eliminated Gianni Morbidelli and going on with a contact that forced Pepe Oriola to pit for repairs and multi-car tough battles for the positions.
James Nash was able to steer away off all the troubles and claimed his second victory of the season that might prove a crucial one in the title fight, as enabled the Craft-Bamboo Lukoil driver to take the leadership of the standings, seven points clear of Oriola and ten of Stefano Comini.
Mikhail Grachev and Dušan Borković completed the podium. The Russian was aiming for another victory after taking the lead from the pole, but eventually he could not resist to Nash’s attack as his car was not well balanced after a collision in the first race. As to Borković he survived an extremely physical fight that involved no less than eight drivers and was plenty of contacts that will keep the Stewards busy with some investigations.

Key facts
Grid – Ferrara’s Subaru and Fulín’s Alfa Romeo have been withdrawn following an engine failure and the Race 1 crash respectively
Start – Grachev makes good use of the pole to take the lead ahead of Kusiri and Nash
Lap 1 – Morbidelli moves up to fourth overtaking Afanasyev and Borković; soon afterwards Morbidelli loses his car at T8 and crashes hard into the barrier
Lap 2 – the safety car is deployed while the wreck of Morbidelli’s car is recovered
Lap 3 – Oriola pits for repairs after a contact with another car and re-joins
Lap 4 – the race resumes: Grachev leads from Kusiri, Nash, Borković, Comini, Afanasyev and Vernay
Lap 5 – Nash overtakes Kusiri for second; Sathienthirakul moves up to 12th ahead of Hanjitkasen and Lemvard
Lap 6 – Comini overtakes Borković for fourth
Lap 7 – Grachev defends the lead from Nash; Afanasyev runs wide at T12 and drops from sixth to tenth
Lap 8 – Nash overtakes Grachev at T1 and takes the lead; Galiana pits after a spin
Lap 9 – Grachev is closely chased by Kusiri, Comini and Vernay
Lap 10 – Afanasyev overtakes Ittiritpong for ninth
Lap 11 – Vernay and Comini overtake Kusiri for third; Borković joins the fight and in one moves climbs up to third after clashing with both Kusiri and Comini
Lap 12 – the fight for third place heats up with Borković, Comini and Kusiri swapping positions several times
Lap 13 – Borković and Comini are third and fourth; Kusiri drops to seventh behind Tassi and Vernay
Lap 14 – Kajaia moves up to fifth overtaking Kusiri, Vernay and Tassi altogether; Sathienthirakul and Ittiritpong crash while fighting for tenth
Lap 16 – Nash wins ahead of Grachev, Borković and Comini; Kajaia beats Tassi, Afanasyev, Vernay and Kusiri in the sprint for the fifth place; Mies and Lemvard complete the TCR Thailand podium