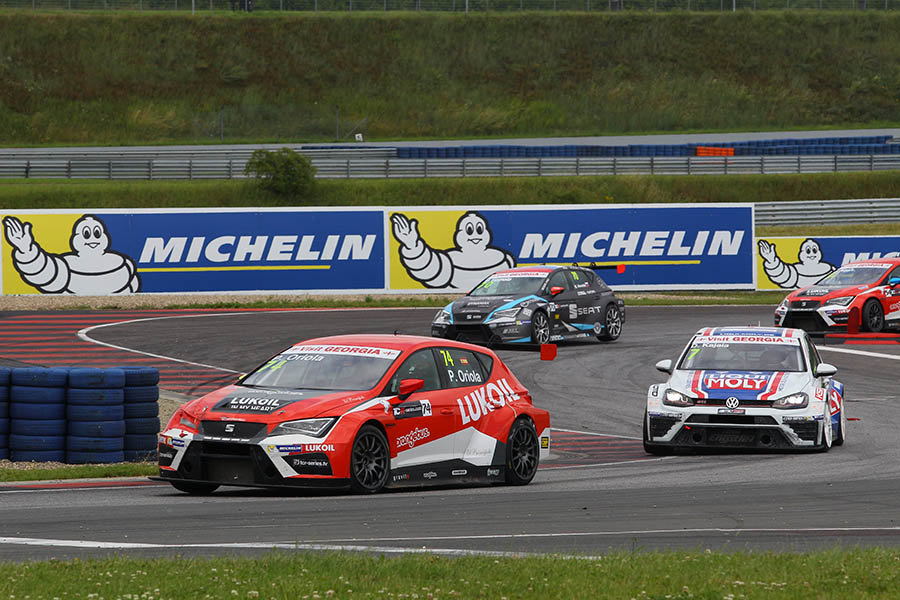 Craft-Bamboo Lukoil’s Pepe Oriola ended a three-month drought and returned to victory with a convincing performance that helped him to regain the championship lead, though on equal points with his teammate James Nash.
Dušan Borković and Nash encored their results from the first race and finished second and third once again.
Stefano Comini completed a brilliant recovery to sixth after an incident at the start and a tough but fair fight with the up-and-coming youngsters Attila Tassi and Niklas Mackschin.
Michela Cerruti was finally able to capitalize on the technical improvement made by the Alfa Romeo Giulietta and finished in a well deserved ninth position.

Key facts
Start – Kajaia makes good use of his pole and leads the field ahead of Oriola and Vernay
Lap 1 – once again there is a pile up at T1: Comini and Morbidelli clash and rejoin at the back; Fulín is also involved, he pits and retires
Lap 1 – Borković and Vernay make contact, the Serbian loses control and hits Homola but they manage to stay on the track; Vernay retires
Lap 2 – Oriola takes the lead from Kajaia; Homola misses the braking point at T1 and drops to sixth; Grachev and Buri make contact, the latter retires
Lap 3 – Oriola pulls away; Nash, Afanasyev and Homola have a tough fight over fourth position
Lap 5 – Tassi and Mackschin fight for seventh
Lap 7 – Borkovićand Nash are closing in on Kajaia
Lap 8 – Comini passes Cerruti for ninth
Lap 9 – Kajaia makes a mistake at T1 and loses second place to Borković
Lap 11 – Kajaia repeats the mistake at T1 and drops at the back
Lap 12 – Oriola controls Borković’s attempt to close the gap; Nash is third, chased by Afanasyev, Homola
Lap 14 – Tassi, Comini and Mackschin are in a close battle for sixth
Lap 15 – Comini steals sixth from Tassi with a clashing overtaking manoeuvre
Lap 17 – Oriola wins from Borković, Nash, Afanasyev and Homola; Cerruti claims ninth