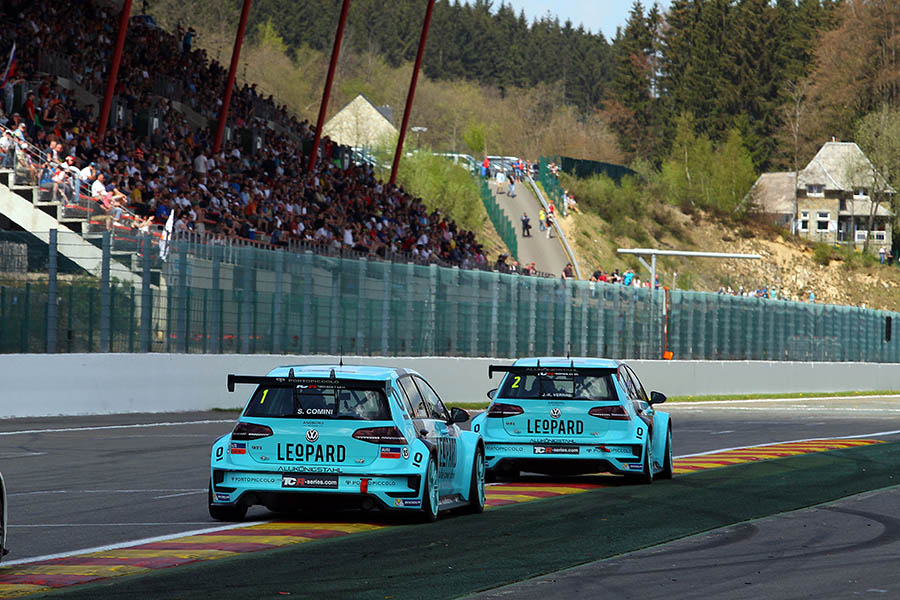 For a maiden win, it was a real triumph! Leopard Racing conquered its first TCR success very close to its Luxembourg headquarters and signed a stunning 1-2-3 with its three drivers: Jean-Karl Vernay, Stefano Comini and guest TCR Germany racer Antti Buri.
It was also the first victory of the year for the Volkswagen Golf Gti cars and the maiden TCR success for Vernay. The Frenchman has proven a quick adaptation to touring car racing and took a well-deserved victory after a close duel with teammate and reigning champion Comini.
Mat’o Homola and Aku Pellinen took fourth and fifth respectively after a relatively trouble-free race, while James Nash, Pepe Oriola, Kevin Gleason and Sergey Afanasyev animated the final laps with a close fight the for sixth position. Local hero Pierre-Yves Corthals took the last point in a race that saw much action at the back of the field, with the Peugeot 308 cars shining in the first part of the race, when Jimmy Clairet ran as high as eighth.
Following today’s races, the situation in the championship is closer than ever, with seven drivers within 28 points and the three first (Oriola, Nash and Morbidelli) covered by only 4 points.
The championship will resume at Imola, Italy on May 22, for rounds 7 and 8.

Key facts
Start – the Leopard Racing cars take a brilliant start, with Vernay ahead of Buri (they make contact before La Source) and Comini
Lap 1 – Vernay leads but is chased Buri; Comini, Homola, Pellinen, Nash, Oriola, Afanasyev and Clairet follow
Lap 2 – Comini passes Buri for second; Borkovićand Morbidelli make contact: the Serbian retires in the pits while the Italian loses a tyre and stops on the track
Lap 3 – Homola passes Buri for third at Les Combes, but goes wide and hands the position back to the Finn; Gleason passes Clairet for ninth
Lap 4 – Comini steals the lead from Vernay with a beautiful move at Les Combes; Kajaia hits Tassi at Blanchimont during a three-way fight with Hezemans
Lap 5 – Vernay retakes the lead from Comini with the same manoeuvre at Les Combes; Grachev outbrakes himself and goes straight at the bus stop
Lap 6 – Kajaia and Tassi are given a drive-through for trespassing the track limits
Lap 7 – Grachev retires in the pits with brake problems
Lap 8 – Tassi, Clairet, Hezemans and Guilvert are in a close fight for 11th
Lap 9 – Vernay wins from Comini, Buri, Homola and Pellinen; Nash claims sixth beating Oriola by a small margin, while Gleason overtakes Afanasyev for eighth