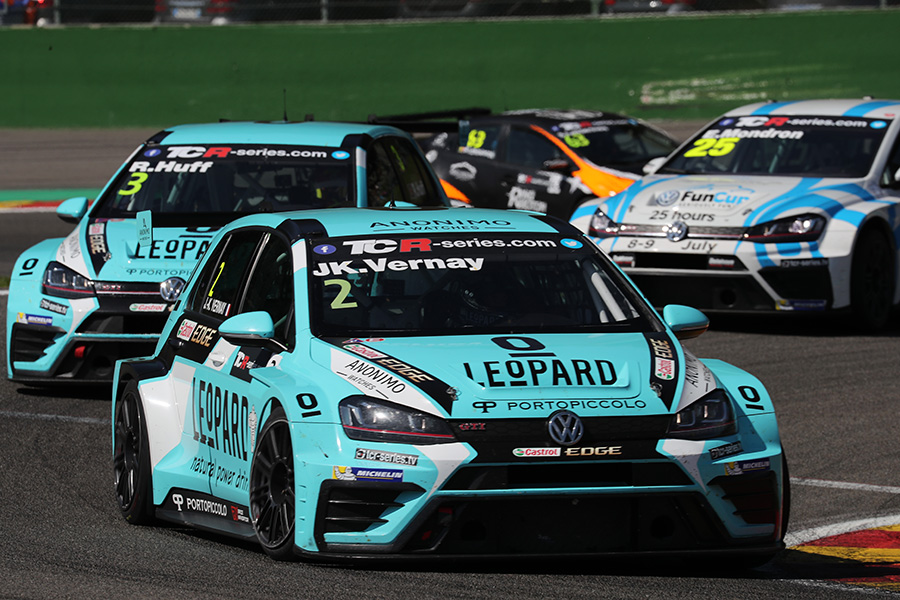 Jean-Karl Vernay confirmed his special relationship with Spa-Francorchamps by taking a superb win in Race 2 on the Belgian track, where last year he obtained his maiden TCR victory. The Frenchman took the lead with authority in lap 5, passing Edouard Mondron and Rob Huff in one move, and pulled away.
The success allowed him to further reinforce his lead in the championship standings. By finishing second, Rob Huff took a podium finish in his first appearance as a full-time competitor in the series and completed the triumphant day for the Volkswagen Golf cars of Leopard Racing, in what can be deemed as a home win, the team being based in nearby Luxembourg and assisted technically by Belgium’s Team WRT.
Stefano Comini (Comtoyou Racing Audi RS3 LMS) took a valuable third place that promoted him to second in the standings, though 25 points behind his former teammate. Once again, it was a very lively race, with some exciting battles. A trio of Belgian drivers took the positions from 4th to 6th: Edouard Mondron (Delahaye Racing Volkswagen Golf), Benjamin Lessennes (Boutsen Ginion Honda Civic) and Frédéric Vervisch (Comtoyou Audi RS3 LMS).
Davit Kajaia, with the GE-Force Alfa Romeo Giulietta, took 7th place after an entertaining fight with James Nash (Lukoil Craft Bamboo SEAT León) and Attila Tassi (M1RA Honda Civic).
The International Series will resume in a few days at Monza for rounds 7 and 8 on May 13 and 14.

Key facts
Start – Potty and E. Mondron start well, but Coronel punts Oriola from the back before La Source, the Spaniard spins and collects Potty; at the back of the field Møller pushes Valente into a spin, they are both out of the race and Coronel as well; Oriola’s car is smoking and drops down
Lap 1 – E. Mondron leas from Huff; Lessennes and Vernay pass Tassi for third and fourth; Paulsen stops along the track
Lap 2 – Lessennes passes both E. Mondron and Huff at Les Combes but runs wide at the chicane and drops to third again; Huff takes the lead and Comini overtakes Vervisch for sixth
Lap 3 – Lessennes passes E. Mondron for second at the chicane; Morbidelli and Colciago make contact
Lap 4 – Kajaia passes Vervisch at La Source for 7th; Lessennes attacks Huff on the outside at Les Combes, they clash and the young Belgian is forced out of the track and rejoins in 5th position
Lap 5 – Vervisch re-passes Kajaia; the latter make contact with Ficza who spins; at Les Combes, Vernay attacks both Mondron and Huff and takes the lead; Corthals, who was 10th, stops in the pits
Lap 6 – Homola and Oriola stop in the pits as well; Vernay pulls away and builds a 1-second leading margin on Huff
Lap 7 – Comini passes E. Mondron for third; there is big battle for 7th between Tassi, Kajaia and Nash
Lap 8 – Lessennes puts a lot of pressure on E. Mondron but without success
Lap 9 – Vernay wins from Huff and Comini, E. Mondron, Lessennes and Vervish; in the battle for 7th Tassi goes wide at the ‘double gauche’ and drops to 9th behind Kajaia and Nash; Altoè overtakes Borković for 10th at the last turn