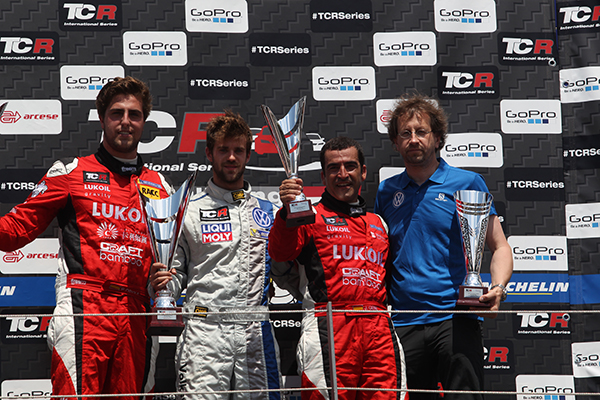 Race 2 - What the drivers had to say

Pol Rosell, winner: “It’s fantastic! To come here, the first race of the Golf and my first in TCR, and to win, it’s just great! It has been a tough weekend, it was difficult to find the right balance and I had to adapt to Michelin tyres, which were new to me, but eventually everything went well. I took a perfect start and was able to build some breathing space, I wouldn’t call that a real gap, but in the last five laps, I was struggling with the tyres and oversteer and it was hard to resist to Jordi and Pepe. I was involved in the testing programme of the new Golf, so it’s a special feeling to achieve this result. It is a very good car, easy to drive, and I think we will see it often on the podium. Of course, it shares many components with the SEAT Leon, but the bodywork is different, and that leads to some differences also in the behavior and driving style required.”

Pepe Oriola, second: “I never raced here before, so it’s nice to be on the podium twice and finish the weekend achieving the goal I had set for myself: to take the lead in the championship. I spent many hours on the simulator to learn the track and took advice from my brother Jordi, who raced here last week, but still, reality is always different. Race 2 was tough, because first I had to pass Belicchi and then hope for a mistake from Grachev. Then I could catch up Jordi and pass him when he went a bit wide in Turn 2, but I couldn’t do the same with Rosell, although he also went wide a couple of times, although not enough to attempt a clear overtaking. Also, I didn’t want to take any risk and preferred to go for the points, considering also the misfortunes of some of my rivals, like Comini and Morbidelli.”

Jordi Gené, third: “I am happy with the results this weekend, given the 30 kg-ballast I had, which here is quite penalizing, as there are a lot of ups and downs. The car worked better in the second part of Race 2 and I could catch Rosell. I knew Pepe was coming back strong behind him, but was totally confident he wouldn’t do anything silly. So, I was focusing on attacking Rosell, which I did, but it didn’t work well and eventually I lost second to Pepe. But, still, I am happy with the outcome and also with the Golf’s first win, as I too did testing work with it, within my duties of development driver for the whole VW Group.”