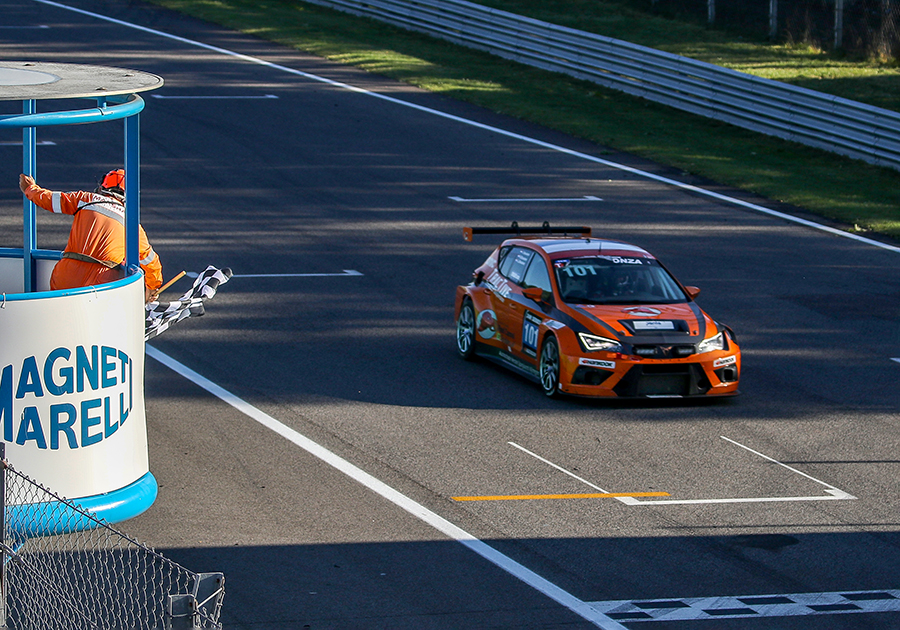 The Red Camel-Jordans.nl CUPRA driven by Ivo and Luc Breukers secured a stunning TCE victory at the 12H Monza, third round of the 24H Series. A win that looked set to go to the Brutal Fish by KCMG Honda Civic FK7 (Martin Ryba/Daniel Lloyd/Pepe Oriola) before mechanical woes struck inside the final 40 minutes of the event.
Having lost positions on Friday afternoon in the 4-hour first leg of the race, the Brutal Fish by KCMG Honda had systematically worked its way back up to the front of the TCE division, and was barely two minutes ahead of its nearest rivals when the Honda ground to a halt on the exit of the second Lesmo with less than 30 minutes to go. After being recovered to the pits, and following a very quick reset, Oriola returned to the track to seal the Hong Kong team its first 24H Series podium in third.
Further drama was to follow as the Autorama Motorsport by Wolf-Power Racing Volkswagen Golf GTI (Miklas Born/Constantin Kletzer/Yannick Mettler), while running second, went wide at the first chicane. This damaged the front left corner of the VW, requiring a precautionary pit stop inside the final twenty minutes. The Swiss team was far enough ahead though to retain second in the class and take its third consecutive podium of the season.
That meant the Red Camel-Jordans.nl CUPRA, despite losing four laps in the early stages due to suspension failure, completed a strong recovery drive to secure its first TCE class win of the season. Ivo Breukers drove the CUPRA across the line to complete 261 laps of the Italian. The result also meant that the Red Camel-Jordans.nl team has moved up into second in the 24H Series Europe TCE standings, just 12 points adrift of reigning Overall TCE Teams’ champion, Autorama Motorsport by Wolf-Power Racing.
Impressively, all three of the top TCE runners managed to finish eighth, ninth and tenth overall.
The NKPP Racing by Bas Koeten Racing CUPRA (Harry Hilders/Gijs Bessem) that was leading the race after Friday’s first leg, completed a solid drive to finish fourth.
The race was suspended at the seven-hour mark due to heavy rain and resumed after two hours.
The next round of the 24H Series will be the 24H Barcelona on September 4/6.