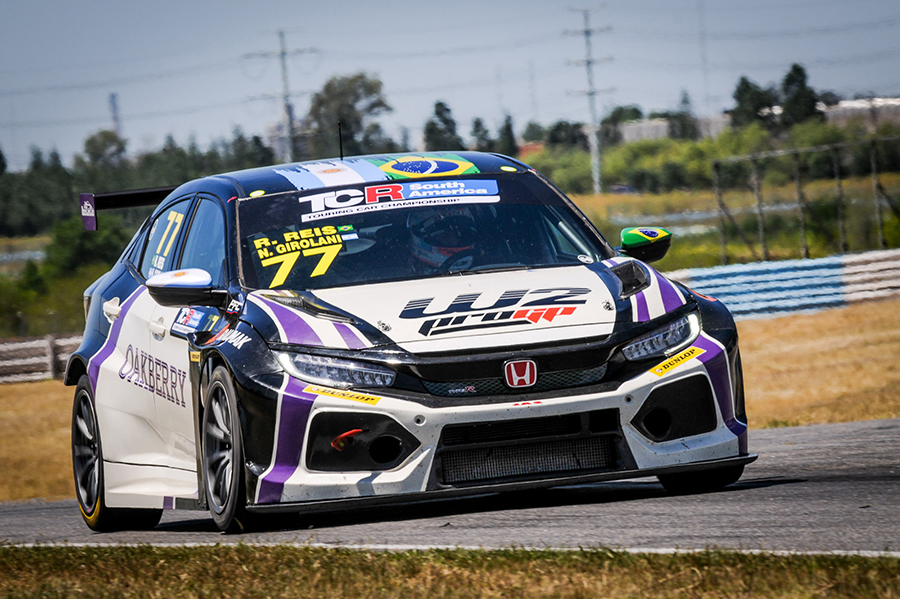 Raphael Reis and his guest co-driver Néstor Girolami were victorious in TCR South America’s endurance race at Buenos Aires. Girolami put in a great effort to take the lead and build a small advantage in the first half of the 60-minute race, while Reis managed to keep his pursuers at safe distance after the pit stop and drove the W2 Racing Honda Civic under the chequered flag ahead of the other Honda cars of Squadra Martino’s teammates Juan Ángel Rosso and Esteban Guerrieri.
The rolling start saw pole sitter Matías Milla leading the field, while José Manuel Sapag and Girolami ran abreast for a couple laps until Girolami moved into P2 and then stole the lead from Milla in lap 3.
Girolami pulled away while Milla, Sapag and Rodrigo Baptista battled for the second place, and they were soon joined by Fabricio Pezzini in the best of the PMO Motorsport Lynk & Co cars. In lap 13, Sapag made a mistake and dropped to fifth, then Pezzini overtook Rodrigo Baptista and Milla, advancing to P2, four seconds behind Girolami.
The pit stops began in lap 16, Sapag was the first amongst the top drivers to hand his car to Guerrieri and in lap 18 Rosso, Tom Coronel and Pepe Oriola replaced Milla, Baptista and Martin Ryba respectively.
Girolami and Pezzini waited until lap 21 before handing their cars to their co-drivers, Reis and Ernesto Bessone.
The second part of the race began with Reis in the lead, a few seconds ahead of Rosso and Sapag; Coronel was fourth a further 20 seconds behind, while Oriola passed Bessone for P5 in lap 27.
There were no further changes, and Reis took the chequered flag 6.8 seconds before Rosso, with Guerrieri in third position; Coronel, Oriola and Bessone followed, filling the positions from fourth to sixth.
The victory meant that Reis relaunched his odds in the title fight, reducing his gap from the leader and teammate Oriola to 16 points, while Rodrigo Baptista remains in second position with a gap of eight points.
The next event of TCR South America will take place at Alta Gracía’s Autódromo Oscar Cabalén, 4/5 December.