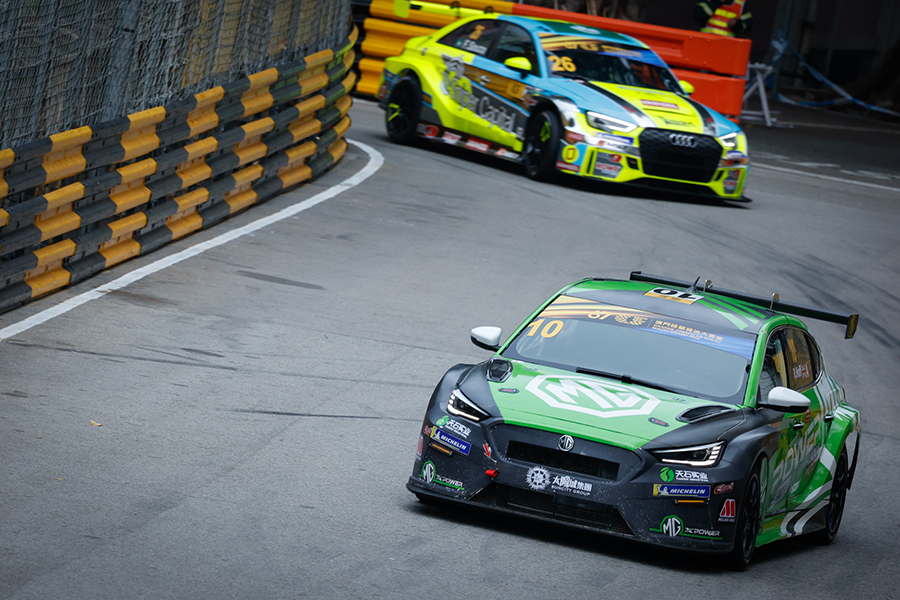 MG XPower driver Rob Huff has taken a record tenth win in an incident-packed first race at Macau, while Teamwork Motorsport’s Ma Qing Hua’s second place with his championship rival Rodolfo Ávila failing to finish secured the Chinese driver the TCR China title.
In the morning qualifying session, Rob Huff secured his tenth pole position at the Guia circuit in a 20-minute dice with Ma Qing Hua, with Huff setting the first target, before Ma was able to go 0.080 seconds quicker. Huff returned with fresh tyres for one more run and obliterated his previous time, taking pole by a substantial 1.9 seconds.
In the race, Huff was out-dragged by Ma’s Lynk & Co into the first corner, but was able to re-pass him down the inside into Lisboa to take the lead. Behind them Ávila’s MG and Henry Lee’s Audi made contact at the Lisboa while fighting for P5, they dropped to ninth and tenth, but continued.
Further back there was a five-car pile-up involving the cars of Wong Chin Hung, He Wei Hang, Mike Ng, Louis Ng and Hu Heng, which saw the safety car deployed straight away.
It took four laps to clear the wreckage with the race resuming on lap five, but the race was soon suspended again with a critical incident in terms of the TCR China championship at Moorish Hill, involving again the Lee’s Audi and the two MG cars of Ávila and Zhang Zhen Dong. Avila’s car was out of the race, meaning all Ma needed to do was finish in the top four to secure the title.
The race was red-flagged and took the best part of half an hour to get back underway. Huff led Ma and de Souza for the restart, which was now just a single-lap sprint with the race being brought forward by a lap, with Huff winning the race by 3.1 seconds over Ma, with De Souza completing the podium.
Another incident at the Mandarin bend during the final lap saw Huan Chuhan’s Audi hitting the Volkswagen Golf GTI of Lam Ka Chun that spun and crashed into the barriers.
Ma won the drivers’ championship, while MG XPower have now been confirmed as the teams’ champions this year.
The second race is scheduled for 15:15 local time on Sunday (08:15 CET), with Huff starting from pole position, well-placed to extend his record even further.