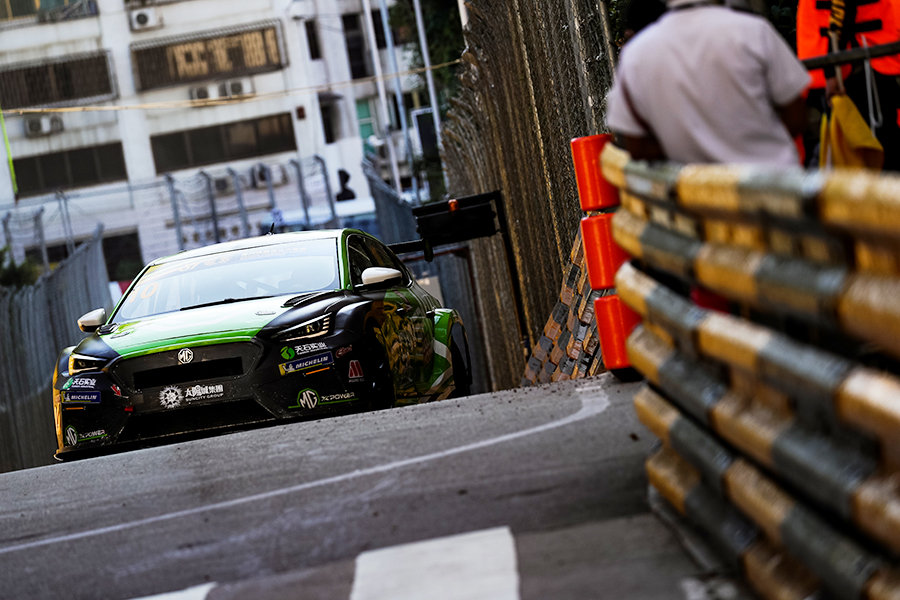 Rob Huff has won a chaotic second race in Macau for MG, in a race which was red-flagged twice and then aborted after only half the scheduled race distance was completed.
The British driver dropped behind the Teamwork Motorsport-run Lynk & Co 03 of Ma Qing Hua at the start, just as he did yesterday, but this time wasn’t able to get back ahead before Lisboa, with Ma leading the first lap.
Behind them, Filipe de Souza had made a terrible start from third on the grid in his T.A. Motorsport Audi RS 3 LMS, with Zhang Zhi Qiang then up to third in the #36 Lynk & Co with team-mate Sunny Wong in fourth behind him.
At the end of the first lap, Huff had a good run through R Bend on Ma, making his move at Mandarin, but the two made light contact, with Ma propelled into the barriers, destroying his car, with the race red-flagged.
It took more than 40 minutes for the barriers to be repaired before the race was restarted.
Huff led the way ahead of Zhang Zhi Qiang and Andy Yan’s MG, who’d passed Wong’s Lynk & Co for third just after the accident.
Another suspension was averted when Ryan Wong crashed out on the way into Lisboa in his MACPRO Racing Honda Civic, with the car quickly recovered before the field came around again.
Unfortunately, it wasn’t long before another incident, with Yang Xi losing control of his Audi RS 3 at the exit of Mandarin, spinning back across the track and narrowly missing Rodolfo Avila’s MG, but collecting the Audi of Wu Yifan, with both cars heavily damaged, and the race red-flagged again and this time called after just six laps of the scheduled 12.
Huff’s win is his 11th at the Macau circuit, and with Huff and Yan on the podium, that also confirms the MG 6 XPower TCR as the models’ champion in TCR China.