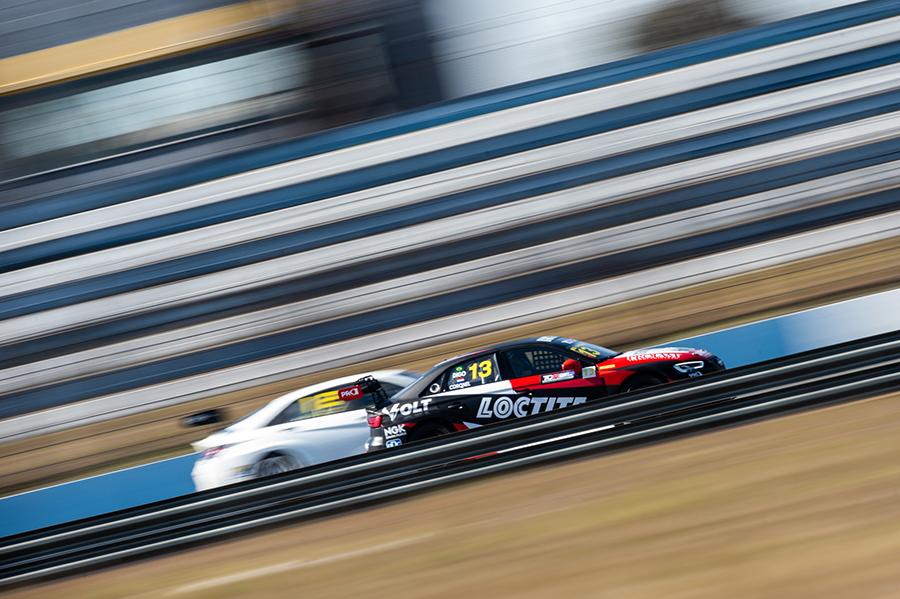 Rodirigo ‘Digo’ Baptista and Tom Coronel have won the second round of the 2021 TCR South America championship at Curitiba, fighting through from tenth on the grid to take the win with two laps to go. The Cobra Racing Team Audi duo won an incident-packed race which was marred by many front-left punctures.
Esteban Guerrieri started the race from pole position in the #33 Squadra Martino Honda Civic, with Sergio Jimenez starting alongside him in his Scuderia CJ Hyundai Elantra on its season debut this weekend.
After the rolling start, the two made side-by-side contact into Turn 1, with Jimenez opting to cut the corner and emerged in the lead. The two drivers began to break away from the chasing pack behind, but by lap six the officials confirmed Jimenez would serve a drive-through penalty for the cut, which dropped him to the back of the order.
Guerrieri then assumed the lead ahead of Valdeno Brito’s W2 Racing Honda, and the Audi of ‘Digo’ Baptista, who’d already made his way through the field after they failed to set a lap in qualifying yesterday.
Jimenez was also carving his way back up the order after his drive-through penalty, while Guerrieri was the first of many drivers to experience a puncture, with the Argentine pitting from the lead on lap 12 for a new front-left tyre – although the car would ultimately retire from the race before mid-distance with a broken driveshaft.
Three laps later, the safety car was deployed when the second Scuderia CJ Hyundai of Giovani Girotto experienced an explosive front-right puncture, with the Elantra stopping out on track.
The safety car period was extended when Roy Blocks’ Alfa Romeo also stopped on circuit; when the race restarted on lap 21, Brito was leading ahead of Baptista and Jimenez.
Jimenez pitted to hand over to Beto Monteiro a lap after the restart, with both Brito and Baptista coming in a lap later to hand their leading cars over to Raphael Reis and Coronel respectively.
From then on it was a battle between Reis and Coronel, with Monteiro some way behind in third. Reis was pressured by Coronel for the final part of the race, with Reis finally making a mistake with just two laps to go, allowing Coronel to dive past him at Pinheirinho to take the lead. Reis’s lock up also meant he immediately punctured his front-left tyre and was forced to pit, promoting Monteiro to second, and the PropCar Racing Alfa Romeo Giulietta of James Vance to third.
Reis rejoined the race in fourth, the last driver to finish on the lead lap, with the Honda cars of Ayrton Chorne and Pepe Oriola down in fifth and sixth, a lap behind, and with Alan Hellmeister seventh, two laps down; all three cars having suffered two punctures each during the race.
After the race, the #16 PropCar Racing Alfa Romeo was demoted to fourth, behind the #77 W2 Racing Honda, by a penalty for a pit stop infringement.
TCR South America will resume at Nova Santa Rita’s Velopark on 28/29 August, with the two-sprint-race format.