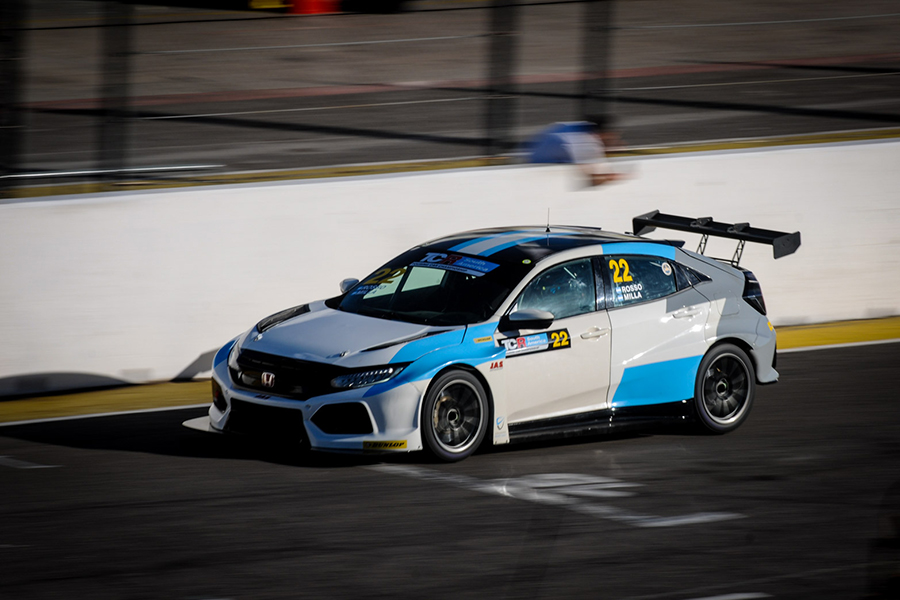 Matías Milla set the fastest lap in the Qualifying for the TCR South America at Buenos Aires and contributed to place the Squadra Martino Honda Civic he shares with Juan Ángel Rosso on pole position for tomorrow’s endurance race.
Their teammates José Manuel Sapag and Esteban Guerrieri qualified in second position, only eight thousandths of a second behind in the combined classification, while another Honda, that of W2 Racing driven by Raphael Reis and Néstor Girolami will start from P3 on the grid.
The current points leader Pepe Oriola, with co-driver Martin Ryba, ranked fifth in the second W2 Racing-run Honda, one place behind the Cobra Racing Audi RS 3 LMS that his rival in the title fight Rodrigo Baptista shares with Tom Coronel.
The session was split in two 15-minute parts, the first one for series’ regulars and the second for guest drivers, with a 15-minute break in between. The grid was determined by the sum of the fastest laps set by each of the two drivers.
Sapag and Rosso topped the first part of the session that was red-flagged 110 seconds before the end when Javier Manta’s Alfa Romeo stopped on the track with a technical issue.
Oriola set the first competitive lap of 1:21.938, that was beaten by Sapag’s 1:21.850; Rosso was next to improve jumping to the top with a lap of 1:21.835, but Sapag struck back clocking a 1:21.662 before the red flag. The disruption spoiled Oriola’s hopes to improve further after pitting for new tyres. Reis (1:22.349) completed a Honda quartet on top, while Rodrigo Baptista (1:22.427) was the best of the rest in his Audi.
In the second part of the session, Guerrieri was the first to complete a lap in less than 1:22, setting a provisional fastest time of 1:21.693, but this was not enough to stay on top.
Girolami went quicker in 1:21.538, but in the final moments Milla emerged as the fastest of the day with a lap of 1:21.512. Damián Fineschi (1:22.144) in his Scuderia CJ Hyundai Elantra N and Coronel (1:22.222) ranked fourth and fifth in this part of the Qualifying, while Ryba was ninth with a lap of 1:22.676.
The 60-minute Race will start at 16:05 local time (20:05 CET); live streaming at www.tcr-series.com.