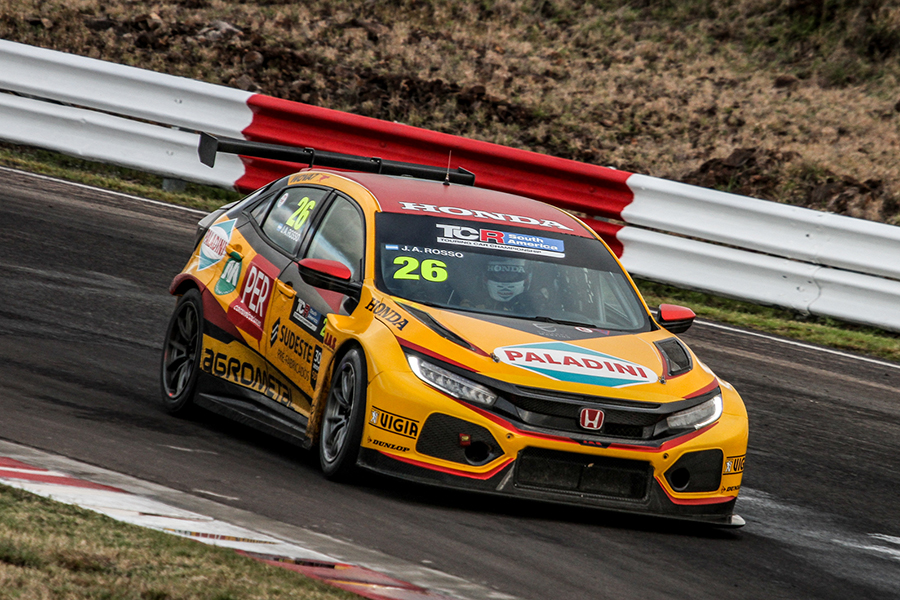 Rosso wins twice in Rivera and joins the title fight

Juan Àngel Rosso and his Squadra Martino Honda Civic Type R dominated the TCR South America weekend at the Uruguayan circuit of Rivera. Rosso topped both qualifying sessions and won the two races, scoring the maximum of 91 points at stake and joining Fabricio Pezzini and Raphael Reis in a three-way battle for the title.

Saturday, in a wet Qualifying, Rosso set the fastest lap in both Q1 (1:25.958) and Q2 (1:25.870). On a wet track, he led the field at the start of Race 1, was followed by Reis, while there was a close battle for P3 between Alceu Feldmann, Pedro Aizza and Pezzini. In lap 3, Aizza overtook Feldmann for third and José Manuel Sapag passed Gabriel Lusquiňos for P6; Feldmann lost fourth place to Pezzini in lap 5 and the latter began to close in on Aizza. Rosso built up a lead of several seconds ahead of Reis, but halfway through the race, as the track began to dry, his advantage was reduced from five to 2.5 seconds. Feldman was chasing the fourth-placed Pezzini but went off twice and rejoined in ninth position; later he was forced to pit after a front tyre exploded. With four laps to go, Reis was only nine tenths behind Rosso, but the Argentine held on to the lead and claimed his maiden win by 2.3 seconds, with Aizza completing the podium.

The Peugeot cars of Guilherme Reischl and Franco Farina filled the front row of the grid for Race 2, but they both stalled at the start. From the second row, Juan Manuel Casella and Lusquiňos made contact but squeezed through, while Edson Reis’ Hyundai Elantra crashed into the back of Reischl’s car and was t-boned by Adalberto Baptista’s Audi; the race was red-flagged.

A new start was given, with Farina alone on the front row, but Casella made a better start and led from Aizza, while Pezzini overtook Rodrigo Aramendia and Lusquiňos, advancing to third. In lap 2, Enrique Maglione’s Peugeot rammed Raphael Reis’ CUPRA that rejoined at the back of the field. Aramendia passed Lusquiňos for P4, while Casella tenaciously defended the lead from Aizza and Pezzini. Behind the leading trio, Lusquiňos retired from fifth, while Sapag and Rosso joined Aramendia in the battle for P4. In lap 11, Rosso overtook Sapag for fifth and Aramendia for fourth; one lap later Aizza made a mistake and Pezzini moved into second. Rosso joined the three leaders and in lap 16 he passed Aizza for third and began putting the pressure on Pezzini when the safety car was deployed after Farina’s Peugeot crashed into the tyre wall. Racing resumed with two laps left and Feldmann passed Sapag for sixth and Aramendia for fifth. Up front, the battle resumed, and the final lap changed everything, Casella went off while fighting with Pezzini and the latter was passed by Rosso who scored his second victory of the day, with Aizza finishing third once again.

In the standings, Pezzini has stretched his lead to 30 points over Reis, while Rosso lies in third position a further twelve points behind.

TCR South America will race again in Uruguay, at El Pinar, on August 6/7.