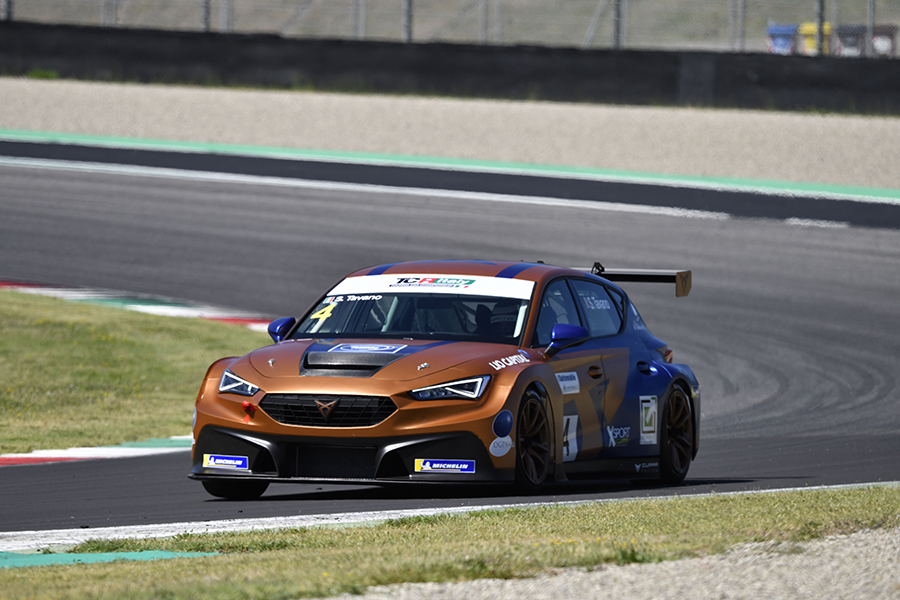 The new CUPRA Leon Compeitición completed a winning TCR debut, as Salvatore Tavano drove it to victory in TCR Italy’s opening round at Mugello.
Tavano started from P3 on the grid, moved into P2 during the opening lap and chased the early leader Marco Pellegrini. The reigning champion managed to overtake Pellegrini during the fourth lap and then pulled away towards an authoritative win.
Pellegrini finished second, while Felice Jelmini completed the podium at the end of an outstanding recovery from 23rd on the grid to third under the chequered flag.
At the start, Pellegrini sprinted ahead of pole sitter Eric Brigliadori who soon dropped to fourth as he was passed by Tavano and Franco Girolami during the first lap.
Tavano was closely chasing Pellegrini, the two made contact in lap 2 and then Tavano took the lead in lap 4. One lap later, Brigliadori pitted with a flat front tyre and this promoted Damiano Reduzzi to fourth. But in lap 8, Reduzzi too pitted with a flat front tyre, while Jelmini whose Hyundai had suffered from a power steering failure in the morning’s Qualifying set the fastest lap of the race and began chasing Michele Imberti for P4.
Jelmini’s charge continued as he passed Imberti in lap 9 and Girolami in lap 10, moving into P3; soon afterwards Girolami’s Honda Civic stopped on the track with a flat front tyre.
In lap 12, Pellegrini made a mistake and went onto the gravel at the Arrabbiata 2 bend, however he managed to rejoin and retained the second place ahead of Jelmini.
Imberti was classified fourth and won the DSG class, while the 18-year old rookie Francesca Raffaele finished a respectable fifth.
Race 2 is scheduled to start tomorrow at 13:10 local time (CEST) and will be streamed live at www.tcr-series.com.