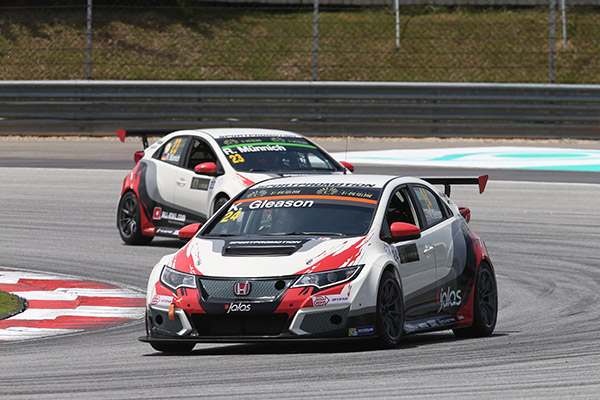 Satisfaction at WestCoast Racing for results in Sepang

WestCoast Racing and its three drivers were satisfied for their first outing with the JAS Motorsport-built Honda Civic TCR in the TCR International Series opening event at Sepang last Sunday.

Team Manager, James Nixon, was pleased with the team’s progress:“Of course we are happy to come away with a trophy. The team has worked really long hours and put in an incredible effort to get the cars here and into this position. We have much to work on, but much to be pleased about.”

Gianni Morbidelli claimed the team’s best results, a fourth and a third in the two races. “The team did an amazing job in just four or five weeks, since we first started. We have work to do to find some more pace to match the SEAT cars, but I am pleased to have got this result,” said the Italian.

Kevin Gleason created a surprise by winning pole position in Saturday’s qualifying session: “I have got to be satisfied with my debut in the series. Pole position, no mistakes and a decent chunk of points is pretty good really.”

René Münnich, a late entrant to the team, was also upbeat about his weekend that finished with a sixth place in Race 2: “No mistakes today and a good finish.”