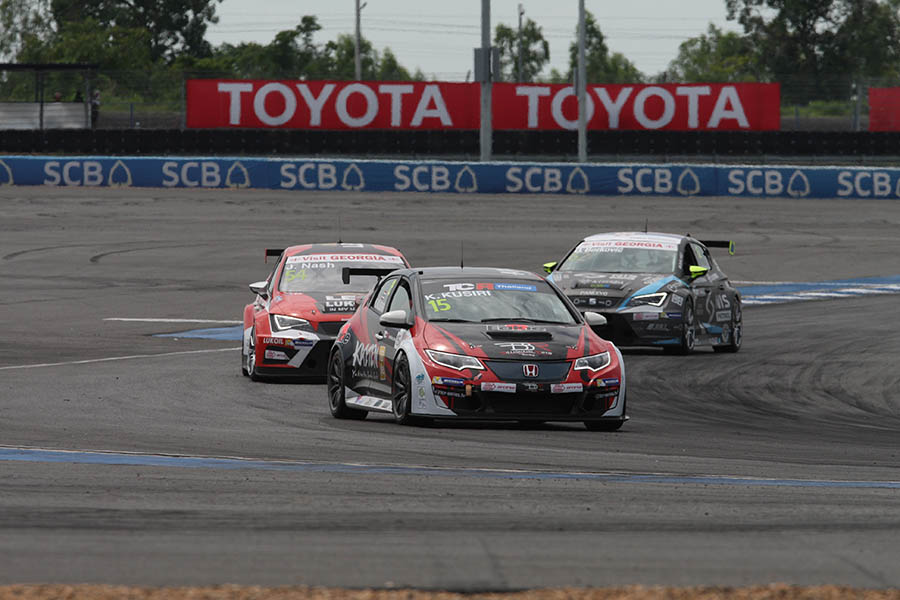 TCR Thailand newcomer Kanthadee Kusiri emerged as the dominator of the series in the event that was run together with the TCR International Series at Chang International Circuit.
For the first time at the wheel of the Team Eakie BBR Kaiten Honda Civic, Kusiri proved to be quick enough to compete on equal footing with the international stars. After qualifying a brilliant eighth overall, he finished both races in the points: sixth in Race 1 ahead of Borković and ninth in Race 2. He was especially good in the second race, when he was even fighting for the overall podium positions before falling behind more experienced drivers.

“Sixth and ninth in my first TCR event and at my home racetrack! I couldn’t be happier! I think I did quite well and it was great fun to be able to fight with all these great international drivers, especially in Race 2, which was really exciting. And obviously I am also very proud that I won the two races for TCR Thailand on my first appearance in the championship,” a delighted Kusiri said.

In Race 1, Narasak Ittiritpong (Vattana Motorsport Honda Civic) and Alexander Mies (Krating Daeng Racing Team SEAT León) finished in second and third.
Mies climbed up to second at the end of Race 2, while the third place went to Jack Lemvard (Vattana Motorsport SEAT León) who managed to recover to 13th overall after he started from the back of the grid.
However, Lemvard was then given a 30-second time penalty for overtaking under yellow flags, which handed the third place to Grant Supaphongs (Krating Daeng Racing Team SEAT León) who moved up to third in the standings, 15 points behind Carlo van Dam.
The series will resume at Pattaya on September 10 and 11.