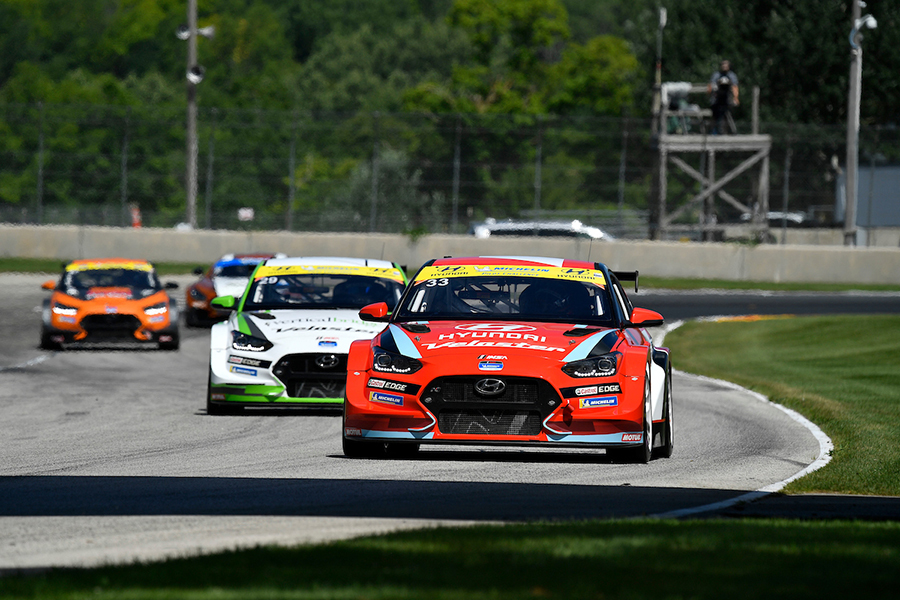 For the second consecutive event the Hyundai Veloster N cars filled the podium of the TCR class in the IMSA Michelin Pilot Challenge. Two weeks after finishing 1-2-3 at Sebring, the Korean cars encored at Road America.
Gabby Chaves and Bryan Norman claimed their maiden win in the Bryan Herta Autosport Veloster #33, beating their teammates Parker Chase and Spencer Brockman in the #29. The two cars ran together for the whole two-hour race and crossed the finishing line only one second apart. A third Bryan Herta car, the #21 of Mark Wilkins and Harry Gottsacker completed the podium.
The KMW Motorsports Alfa Romeo of Roy Block and Tim Lewis emerged as the best of the rest, as Lewis overtook James Vance for P4 with 15 minutes left on the clock. Vance drove to the fifth place the Fast MD Racing Audi RS 3 LMS he shared with Max Faulkner who had set pole position in Qualifying.
Michael Lewis and Mason Filippi, who were joint leaders in the standings before the race in the fourth Bryan Herta Hyundai, retired early in the race after Filippi collided with Gottsacker’s sister car.
Wilkins and Gottsacker have retained the leadership in the standings, 5 points over Chaves-Norman and 10 ahead of Lewis-Filippi and the Road Shagger Racing Audi of Jonathan Morley and Gavin Ernstone.
The next round of the Michelin Pilot Challenge will be at Virginia International Raceway on August 21/22.