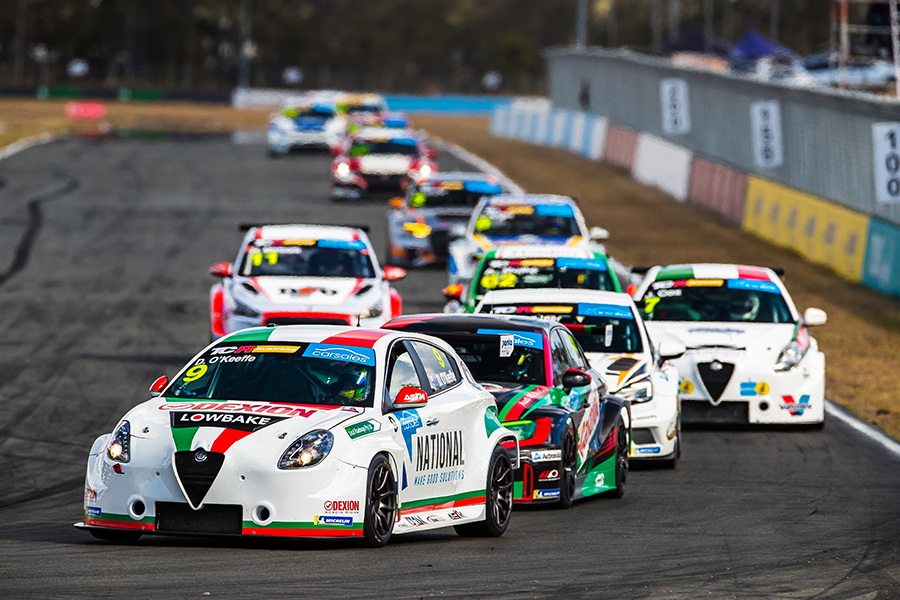 Second lights-to-flag win of the day for O’Keeffe

Dylan O’Keeffe encored his Race 2 success at Queensland Raceway and scored his second lights-to-flag victory of the day, the fourth for him in TCR Australia’s inaugural season.
In a photocopy of Race 2, O’Keeffe took the lead starting from the pole, while Russell Ingall followed him for the whole 21-lap distance. Just like in the previous race, the Alfa Romeo built a gap of a couple of seconds over the Audi and then, again, its leading margin faded a bit in the second part of the race. However, O’Keeffe remained in control and maintained a 1.2-second advantage under the chequered flag.
Behind the two leaders, Tony D’Alberto completed the podium, as he was able to keep Nathan Morcom and Aaron Cameron at bay for the whole race.
But the most interesting fight in terms of the championship fight was that for the sixth position that involved O’Keeffe’s teammate Jordan Cox and the championship leader Will Brown. Despite his many efforts, Brown did not manage to pass Cox and settled in eighth position that became the seventh as John Martin was dropped from sixth to eighth by a 5-second penalty.
This meant that O’Keeffe cut another 21 points from Brown’s leading margin in the standings that has now shrank to 57 points. D’Alberto moved into the third position, a further 42 points behind, while James Moffat slipped from third to fifth – behind Morcom – as he finished the race in 15th position following a pit stop for replacing a flat rear tyre.
TCR Australia’s next event will be at Winton on August 30th/September 1st.