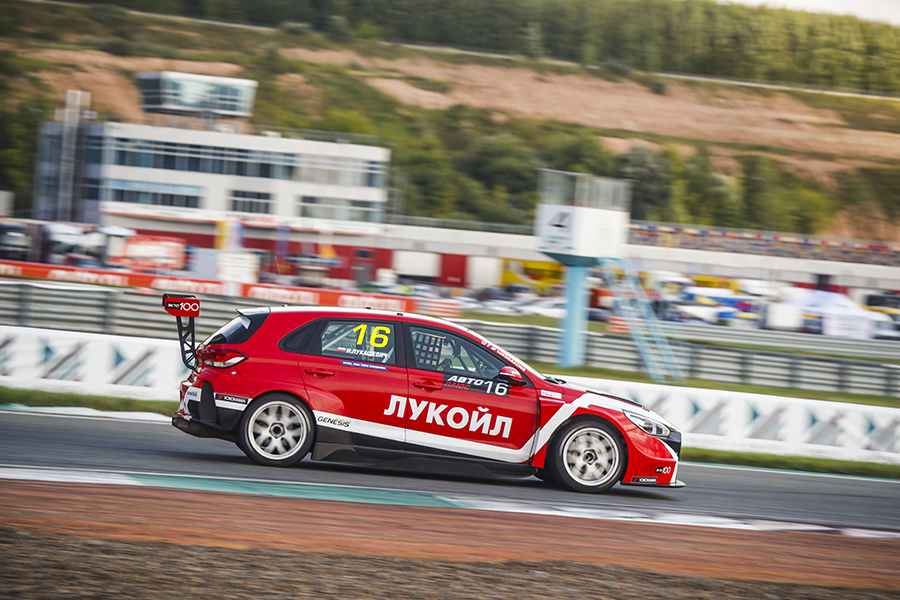 Second pole position of the season for Lukashevich

Ivan Lukashevich claimed his second pole position of the season in TCR Russia’s third event at Kazan Ring. On his second attempt in Q2, the LUKOIL Racing Team’ driver completed a lap of 1:26.775 at the wheel of his Hyundai i30 N, and so ousted his own teammate Aleksey Dudukalo from the top of the timesheet. Dudukalo had set a provisional fastest lap of 1:26.802 on his first attempt but was not able to improve.
Klim Gavrilov qualified in third position, only seven hundredths of a second slower than Lukashevich; Gavrilov was followed by Mikhail Mityaev and the impressive rookie Rustam Fatkhutdinov. Grigory Burlutskyi who had been the fastest in Q1, settled in sixth position with a time of 1:27.116 that was nearly one tenth slower than his best lap in Q1. The current points leader Kirill Ladygin qualified a disappointing nineth.
The 20-minute Q1 had been pretty tight, with the 13 fastest cars covered by less than seven tenths. Five drivers took turns on top of the timesheet: Mityaev (1:27.474), Ilya Yekushevski (1:27.423), Lukashevich (1:27.251), Dudukalo (1:27.070) and finally Burlutskyi (1:27.025). Lukashevich improved to rank third (1:27.179) and so did Gavrilov who moved into fourth (1:27.180). The most distinguished victim was Bragin who couldn’t’ achieve better than 13th and remained out of Q2.
Sunday’s races will be streamed live at www.tcr-series.com: Race 1 at 11:50 local time (10:50 CEST), Race 2 at 16:55 local time (15:55 CEST).