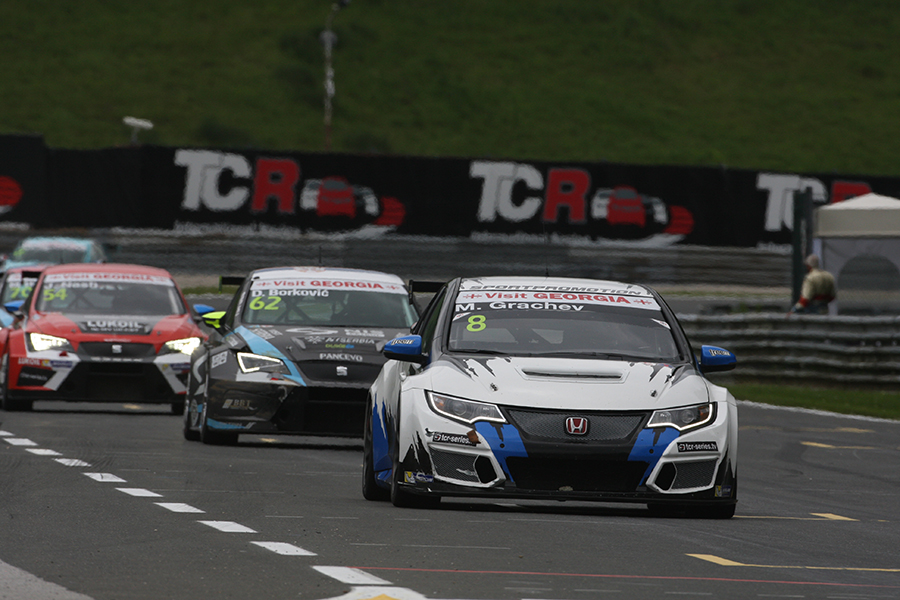 Second victory in a row for Mikhail Grachev

Two weeks after breaking his duck at Imola, where he claimed a maiden victory in the TCR International Series, Mikhail Grachev scored a second one in a row at the end of another race plenty of drama.
The WestCoast Racing driver managed to survive a series of incidents and technical failures that eliminated some of the main players such as the Oriola brothers, Dušan Borković and Harald Proczyk.
It was a sweet and sour race for Mulsanne Racing; Petr Fulín’s Giulietta was eliminated in the incident at the start, while Michela Cerruti scored her first championship point.
In terms of the championship fight, the result played in favour James Nash who finished second and Gianni Morbidelli, who was able to recover to fourth position after being involved in the incident with Jordi Oriola at the start. With Pepe Oriola out of the points and Stefano Comini classified eighth Nash moved up to third, with a gap of 19 points, while Morbidelli lies only one further point adrift.
The second race will kick off at 14:05 local time.

Key facts
Start – Vernay sprints, from Pepe Oriola; behind them there is contact between Jordi Oriola and Morbidelli; Proczyk spins in avoidance and is hit by Fulín
Lap 1 – Pepe Oriola passes Vernay and takes the lead; Proczyk and Fulín pit for repairs
Lap 2 – Jordi Oriola passes Vernay for second
Lap 3 – Afanasiev goes off onto the gravel trap at Turn 7
Lap 4 – Jordi Oriola is chasing his brother Pepe; Borković, Grachev, Vernay and Nash fight for third
Lap 5 – Jordi Oriola slows down and pit with a sensor problem; the safety car is prompted to recover Afanasyev’s car
Lap 7 – the race resumes; Pepe Oriola leads from Grachev, Borković, Nash, Vernay, Homola and Morbidelli
Lap 8 – Homola and Morbidelli overtake Vernay and move up to fifth and sixth
Lap 11 – Pepe Oriola is chased by Grachev
Lap 13 – Pepe Oriola slows down and retires with a suspected westgate failure; Grachev inherits the lead with Borković on his tail
Lap 16 – Grachev defends the lead from Borković who is under pressure from Nash
Lap 17 – Borković and Nash make contact while fighting for second; the Serbian driver goes off onto the gravel at Turn 11; Grachev wins from Nash, Homola and Morbidelli