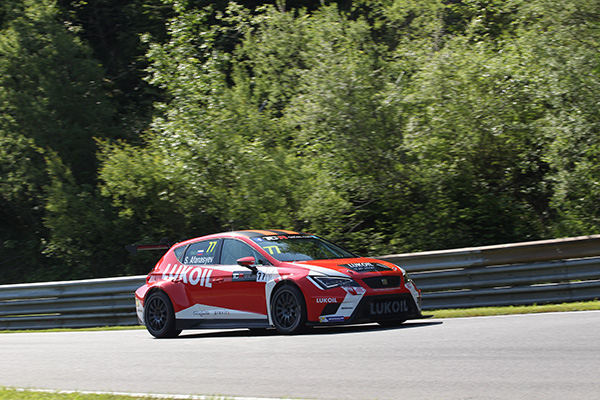 Sergey Afanasyev was fastest in the test session

Team Craft-Bamboo Lukoil’s Sergey Afanasyev emerged as the fastest driver in this morning’s test session at the Salzburgring.
The Russian driver clocked a lap of 1:27.208 in the final stages of the 105-minute session, demoting his own team-mate Pepe Oriola to second; the Spaniard had completed a lap in 1:27.314 at the beginning of the test session.
“I’m very pleased with the session, it shows that little by little it’s coming together. The car felt good and I am more and more acquainted with it. We still can improve it and there are a couple of places where I need to improve. This is a very challenging track, where I raced only once ten years ago, in Formula Renault, so it’s my first time with covered-wheel cars,”Afanasyev said.
Stefano Comini of Target Competition ranked third (1:27.591) ahead of Jordi Gené (1:27.772) and current championship leader Gianni Morbidelli (1:27.824), the best of the Honda drivers.
Morbidelli commented: “Good session for me, I am happy with how things are going. Of course, I feel the 30 kgs of success ballast, in the straights and the braking zones, but it is better than expected, especially on a demanding track such as this. I think we can still bring down lap times of a couple of tenths with some set-up adjustments but in terms of performance, we’re almost there.”
Fernando Monje’s Opel Astra stopped on the track in its first lap out of the pits with an engine issue; later on the Spanish driver sat for a few laps at the wheel of the Campos Racing second car, before handing it over to touring car veteran Markus Östreich who was invited to test the car. A very experienced driver, Östreich has recently raced an Opel Astra OPC car to a class victory at the Nürburgring 24 Hours.
TCR drivers will return to action tomorrow morning at 10.00 for the first Free Practice.