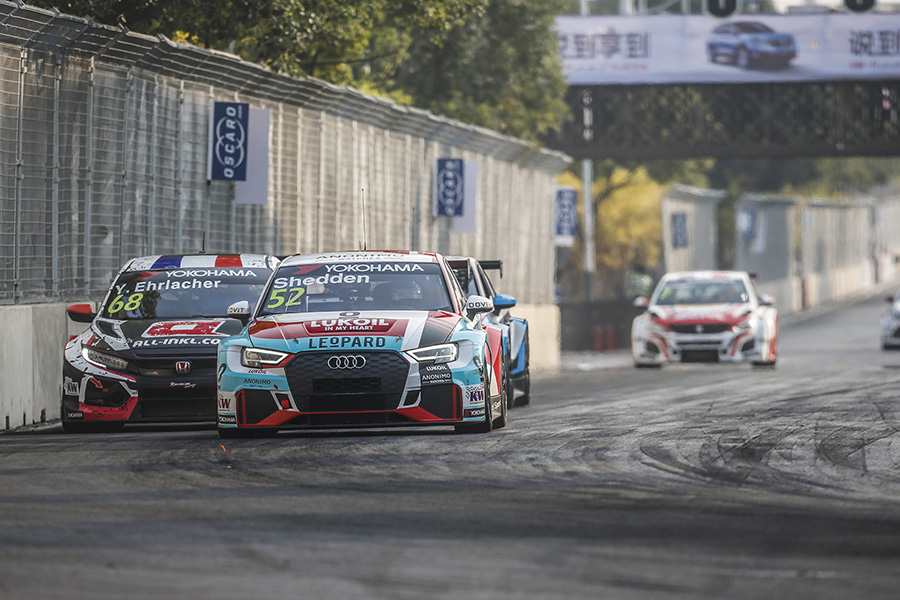 After Mehdi Bennani in Race 2, Gordon Shedden became the thirteenth different winner in the WTCR maiden season.
The Scotsman copied his teammate Jean-Karl Vernay’s exploit in yesterday’s Race 1 and drove his Audi RS3 LMS to a lights-to-flag victory from pole position in Wuhan’s Race 3; though it was not an easy one, as he survived to a couple of rutheless attacks from Denis Dupont and then successfully defended himself from a determined Frédéric Vervisch during the final laps.
There was plenty of drama at the start: Dupont tried to dive inside of Shedden who was leading and hit him, the Scotsman was able to stay at the front, while Guerrieri cut the chicane moving up to second ahead of Dupont and Vervisch.
Behind the leaders, Vernay and Conte made contact, the latter spun and was collected by Huff in a pile up that involved Szabó, Homola and Scheider.
During the safety car period, following an order from Race Control, Guerrieri dropped to fourth behind Dupont and Vervisch.
Racing resumed on lap 9 and Vernay lost his sixth position as he served a drive-through for causing the first lap collision; on lap 10 Dupont outbraked himself in a chicane, hit a stack of tyres and pushed it into the side of Shedden’s car. Vervisch moved up to second ahead of Dupont, while the safety car was deployed again to put the tyres back in place.
The race resumed for good on lap 15 and Muller retired with a technical issue; three laps later Berthon overtook Oriola for fifth.
Positions did not change in the final five laps, but there were a couple of thrilling battles: one for the leadership between Shedden and Vervisch and one for fourth with Guerrieri closing all the gaps to keep Berthon at bay.
Eventually nothing changed and Shedden won from Vervisch, Dupont, Guerrieri, Berthon, Oriola, Ma, Ceccon, Bennani and Björk.
As far as the title fight is concerned, Tarquini is still the leader with 241 points, despite he did not score in the weekend, Björk follows with 234, one point more than Muller; Oriola moved up to fourth with 207 points, two more than Vernay. Further back, but closer, are Guerrieri (199), Michelisz (195) and Vervisch (192).
The WTCR will move to Suzuka, Japan, for the penultimate event of the season on October 27/28.