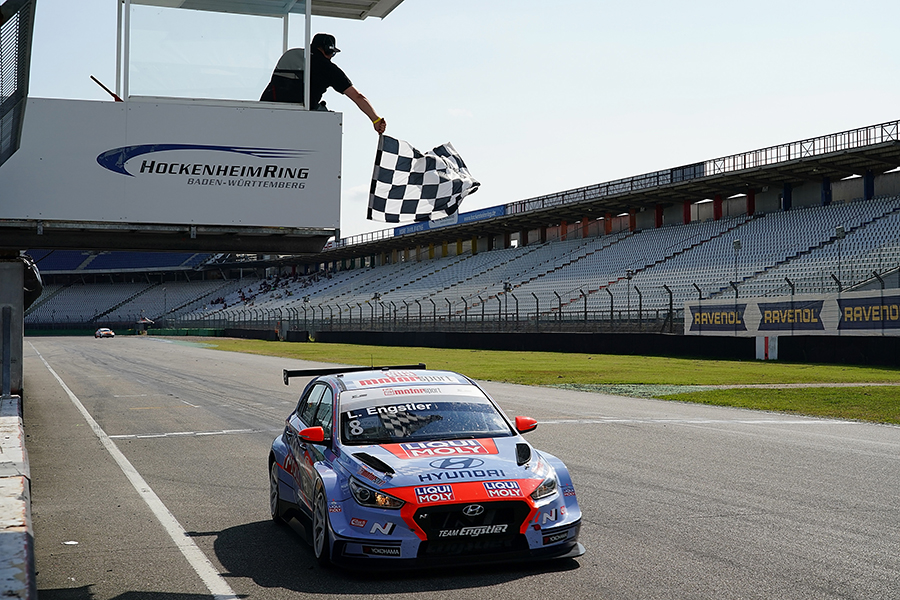 Luca Engstler scored a comfortable lights-to-flag victory in the ADAC TCR Germany’s first race at Hockenheim; this was the sixth win for the Hyundai Team Engstler’s driver who has extended his leadership in the standings to 86 points over Dominik Fugel, while the third-classified Eric Scalvini has dropped 100 points behind.
Engstler made good use of the pole at the start to lead from Jonas Karklys, Martin Andersen, Dominik Fugel, Robin Jahr and Spanish guest driver Rubén Fernández who was put under investigation for a suspected jump start.
At the end of the first lap Szymon Ładniak and Scalvini made contact while fighting for P7 and both dropped behind Marcel Fugel and René Kircher. It took five laps before Ładniak and Scalvini re-passed Kircher moving up to eighth and ninth, then they began to chase Marcel Fugel.
In the following five laps the race became processional while Engstler built a small gap ahead of Karklys, and Andersen shook Dominik Fugel off his tail.
In lap 12, Scalvini passed Ładniak for P8 and soon afterwards the Honda of the Polish driver slowed and pulled over with a technical issue.
In lap 14, Sergio López overtook Kircher for P9. In lap 15, Scalvini made a mistake while attempting to pass Marcel Fugel, which opened the door to López for overtaking the Italian and moving into P8. Scalvini, however, retook the position in lap 16.
One lap later, Kircher, Phillip Regensperger and Albert Legutko came together in Turn 4; Regensperger’s Opel Astra crashed into the barriers, while Legutko’s Honda Civic and Kircher’s Volkswagen Golf were able to continue, with the latter losing the front bumper on the track.
Engstler led a Hyundai 1-2-3 ahead of Karklys and Andersen, with Dominik Fugel a distant fourth; Fernández beat Jahr for P5 but was demoted one position by a five-second penalty for jump start; behind them Scalvini and López overtook Marcel Fugel to finish seventh and eighth.
Track action will resume tomorrow morning at 09:00 (CEST) with the Qualifying session for Race 2.