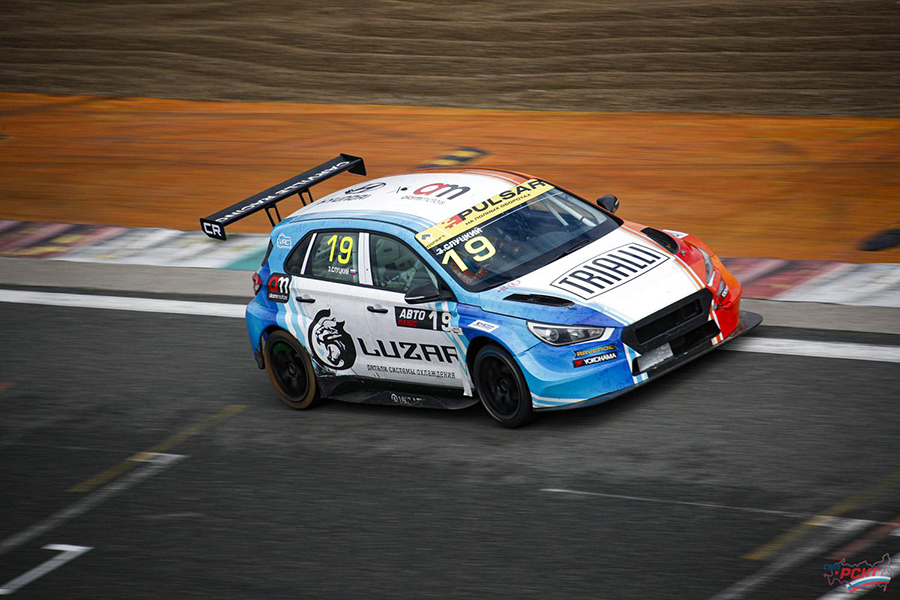 Carville Racing’s Zakhar Slutskiy took his maiden victory in TCR Russia at the end of the first race at Kazan Ring that provided plenty of action. Lukoil Racing Team’s Ivan Lukashevich completed a 1-2 finish for the Hyundai i30 N cars after performing an amazing recovery from P11 on the grid.
At the start under a light rain, pole sitter Aidar Nuryev and Mikhail Mityaev got off abreast, Dmitry Bragin who was fifth on the grid benefited from the fight to take the lead; Mityaev and Andrej Maslennikov made contact into Turn 1, which opened the gap to Pavel Kalmanovich who moved into second.
Nuryev, Slutzkiy and Maslennikov were fighting for P3; Maslennikov passed both his rivals in lap 1, but Slutskiy immediately re-took the third position.
In lap 2, Mityaev passed Nuryev for P5, while Egor Orudzhev, Kirill Ladygin, Grigory Burlutskiy and Maslennikov were involved in a close battle for P7.
In lap 4, Slutskiy passed Kalmanovich for second and began to close the gap to Bragin. Orudzhev advanced to fourth as he overtook Nuryev and Mityaev between laps 5 and 6. One more lap, and Slutsky took the inside into the last turn, stole the lead from Bragin and began to create a gap.
Orudzhev and Burlutskiy moved into third and fourth as they both overtook Kalmanovich in lap 8, then Orudzhev passed Bragin for second. Further behind Lukashevich was elbowing his way through the field and the final third of the race he had a much faster pace than everybody else. He passed Mityaev for P8 in lap 11, then Ladygin, Nuriev and Kalmanovich in lap 12, climbing to fifth and joined Burlutskiy and Bragin who were fighting for the third position.
During the final two laps Lukashevich completed his outstanding recovery, passing Slutsky and Bragin in lap 14, moving up to third and finally overtaking Orudzhev for second during the last lap. At the same time, Burlutskiy passed Bragin for fourth.
Lukashevich and Slutskiy have now moved into second and third in the standings; they are split by three points, although Ladygin still retains a solid lead of 28 points.
Race 2 is due to start at 16:15 local time (15:15 CEST); live streaming at www.tcr-series.com.