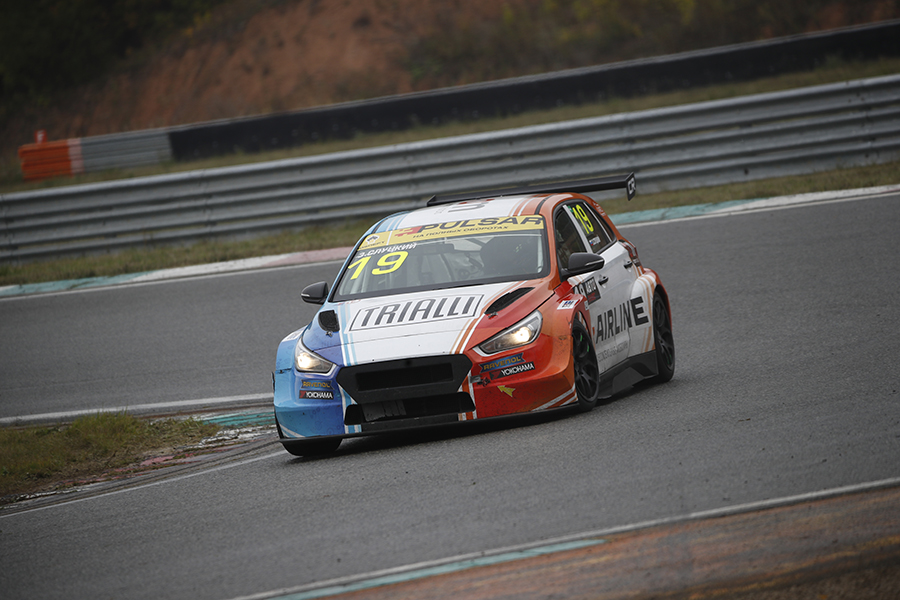 Slutskiy wins and closes in on Ladygin in the standings

Zakhar Slutskiy claimed a light-to-flag victory in Race 1 of TCR Russia’s penultimate event at Fort Grozniy. Starting from the pole position, the driver of Carville Racing dominated the race in his Hyundai i30 N, pocketing his second win of the season and reducing his gap in the standings to 27 points from the leader Kirill Ladygin who was classified 11th after being involved in a last-lap incident.
Slutskiy got off to a good start, as did Lukoil Racing’s Ivan Lukashevich, who was next to him on the grid. Lukashevich’s teammates Andrej Maslennikov and Egor Orudzhev followed in third and fourth positions with Dmitry Bragin in P5. During the first lap, Egor Fokin overtook Mikhail Mityaev for sixth.
There were no changes in the positions until lap 5, when Lukashevich made a mistake and dropped behind his fellow Lukoil Racing colleagues Orudzhev and Maslennikov.
The race became processional, then in lap 10 the safety car was deployed following a collision that involved three cars of the Super Production class.
Competition resumed in lap 13, with the drivers in the same order.
In the final part of the race, Ladygin who had cruised in 10th position from the start, moved up to ninth passing Grigory Burlutskiy and then began to put the pressure on Pavel Kalmanovich.
Up front, Slutskiy controlled his pursuers and won by half-a-second ahead of Orudzhev, while Maslennikov handed the third position to Lukashevich who is now third in the standings, 36 points behind Ladygin.
During the last lap, Fokin and Mityaev collided, Kalmanovich swerved in avoidance and Ladygin could not avoid hitting him. The LADA Sport driver got the worst of the incident and limped to the end in 11th position.
Race 2 is due to start at 16:15 local times (15:15 CEST); live streaming at www.tcr-series.com.