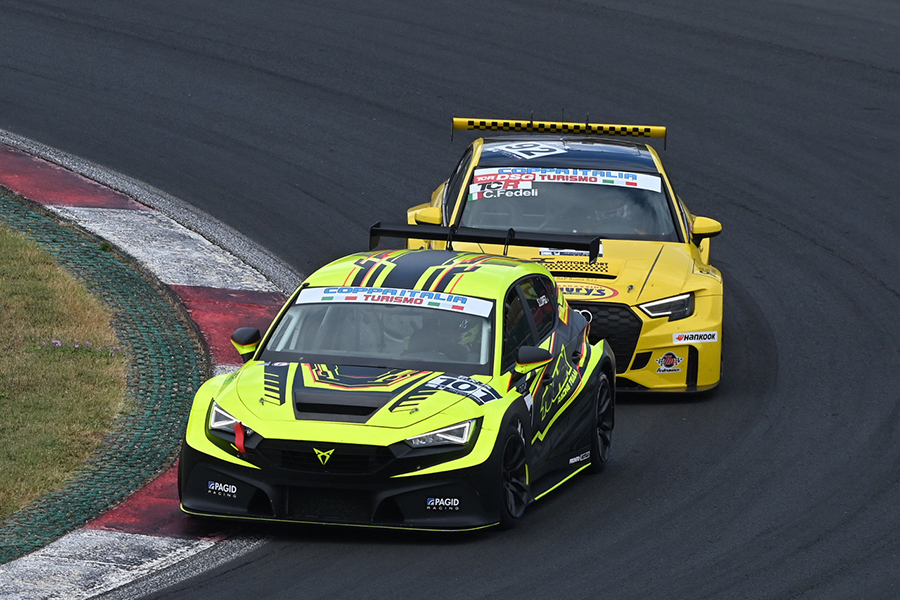 The RC2 Junior Team completed a successful expedition in the Coppa Italia Turismo event at Vallelunga. The Spanish outfit entered three CUPRA cars and won both races with Rubén Fernández and Sergio López.
After setting pole position, Fernández won Saturday’s Race 1 on a wet track leading from lights to flag. Alfredo De Matteo chased him for the whole race, but had to settle in second position, nearly ten seconds behind. The leader of the standings, Mauro Guastamacchia (Aggressive Team Italia, Hyundai i30 N), spun off and rejoined but then retired after colliding with Steven Giacon (Tecnodom Sport, Audi RS 3 LMS). Marco Butti (Next Motorsport, Hyundai i30 N) followed the leaders in third position until he retired with a technical issue, three laps to the end. Carlotta Fedeli inherited the third position in the TCR class and topped the DSG Trophy.
Fernández was set to encore his victory in Sunday’s race but retired from the lead with four laps to go. His Venezuelan teammate López inherited the first position completing an impressive recovery from P18 on the grid and crossed the finishing line 9.7 seconds ahead of Adriano Visdomini, while Fedeli finished third overall and repeated her win in the DSG Trophy. Guastamacchia retired again due to a broken driveshaft, however he retained the leadership in the standings, 27 points clear of Fedeli.
The next Coppa Italia event will be at Magione, 31 July/1 August.