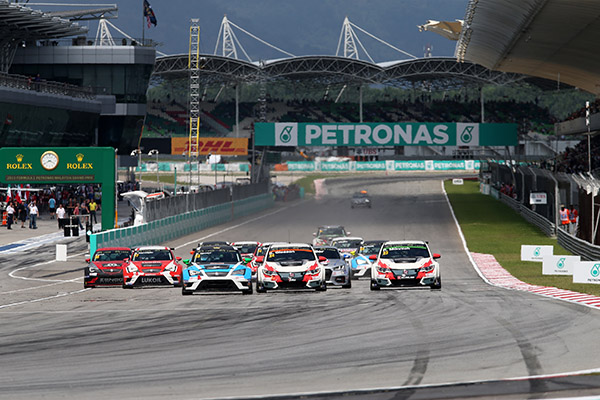 The first-ever winner of a TCR race was a Swiss: Stefano Comini took a resounding success in today’s Race 1 at Sepang. The Target Competition driver took a wonderful start and despite a slight mistake at turn 1 was able to take the lead as from lap 2 and pulled away thanks to the fierce battle behind him.
The SEAT cars eventually managed to monopolize the podium with two Team Craft-Bamboo Lukoil boys, Pepe Oriola and Sergey Afanayev in second and third. Still, they had to sweat in their fight with the West Coast Honda Civic TCR cars of Gianni Morbidelli and poleman Kevin Gleason. The Japanese cars finished fourth and sixth, with Andrea Belicchi (Target SEAT) who clinched fifth on the penultimate lap.
Race 2 will take place tomorrow at 12.35 local time.

Key facts
Grid – All cars were on the 1260-kg minimum weight for Race 1 after a BoP adjustement. The Proteam Ford Focus of Diego Romani and the Campos Opel Astra cars of Igor Skuz and Jordi Oriola did not make the grid because of technical problems.
Start – Engstler, Münnich and Comini took an excellent kick off and got side-by-side with poleman Gleason. At first corner, though, Comini and Münnich ran a wide while Morbidelli and Engstler made contact.
Lap 1 – Gleason kept the lead until the end of lap 1 when he was passed by Comini; Belicchi hit Ficza but with no harm.
Lap 2 – The battle for 2ndwas fierce between the SEAT cars of Afanasyev and Oriola and the Honda cars of Gleason and Morbidelli; Grachev led the rest of the pack, while Engstler retired with a damaged front suspension resulting from first corner action.
Lap 3 – Oriola took second from Afanasyev and was now 4 seconds behind leader Comini.
Lap 4 – Grachev stopped with an engine problem; Münnich pitted due to a fuel injection issue.
Lap 5 – Ficza and  Nykjær had a close fight for eighth.
Lap 7 – Oriola reduced the gap to three seconds, while Afanasyev defended third place from Gleason.
Lap 8 – Gleason was in troubles with his tyres and dropped behind Morbidelli and Belicchi.
Lap 9 – Comini won from Oriola and Afanasyev; with Morbidelli, Belicchi, Gleason, Gené, Nykjær, Fizca and Veglia in the points.