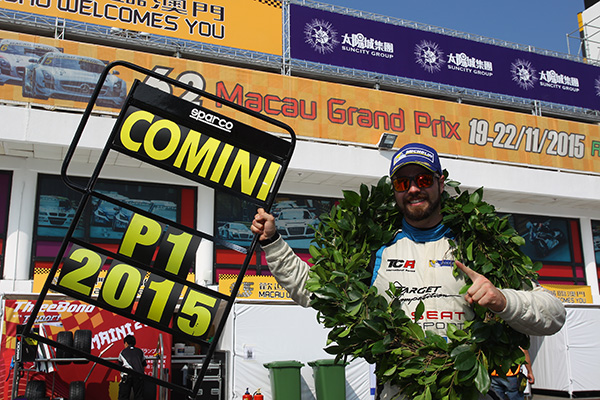 “My congratulations go to Stefano for winning the championship, he is a worthy first TCR Champion!” Such flattering words were said by Rob Huff, during the winners’ press conference at Macau. And he’s definitely one who understands of touring car racing and drivers.
Indeed, Stefano Comini fully deserved to win the Drivers’ title in the maiden season of the TCR International Series. The Swiss won the inaugural race at Sepang and the final one at Macau. And in-between he proved to be the most consistent of the field throughout the season, even in spite of some difficult moments that risked to sideline him because of budget shortage.
Six victories – more than anyone else – and five other podium results formed the backbone of his triumph. But consistency was also a factor as he scored points in twenty of the series’ twenty-two rounds.
However, results were only a part of the equation. Determination was another weapon that helped Comini to bend the opposition of his strongest and more experienced rivals: Pepe Oriola, Jordi Gené and Gianni Morbidelli.

“I can be proud of myself, because I worked hard and overcame budget problems. I was able to put enough psychological pressure on the other title contenders until they cracked. I believe that my title proved that talent, determination and hard work can make the difference,” Comini declared.
After being crowned champion, Stefano Comini is now facing another memorable moment: getting married on Wednesday!
Congratulations and best wishes!