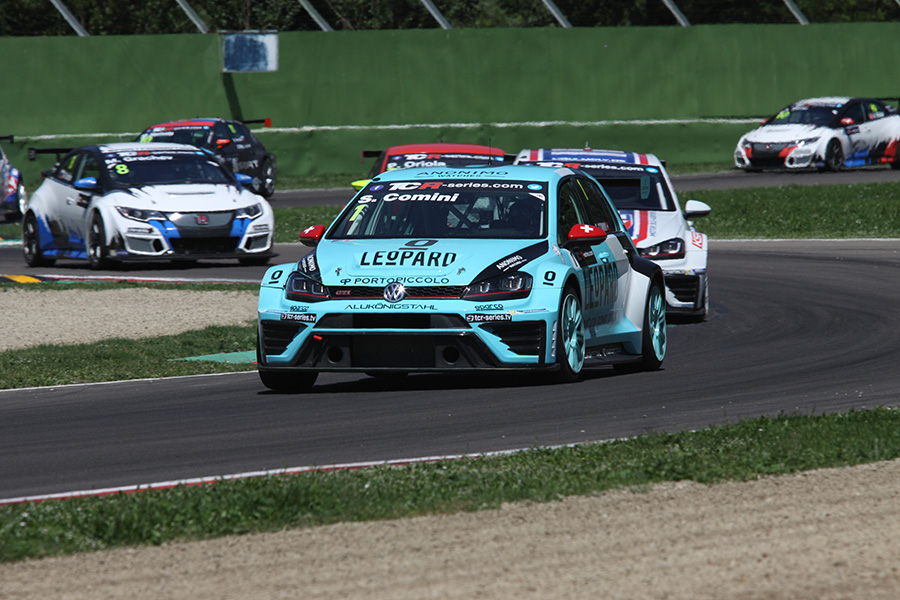 Reigning champion Stefano Comini claimed his first victory of the season at the end of a race that was plenty of drama and gave Leopard Racing amd Volkswagen their second consecutive win after Jean-Karl Vernay’s in Spa Race 2.
The outcome of the first race in Imola spoke in favour of Pepe Oriola as far as the title fight is concerned, because the Spaniard’s closest rivals – Gianni Morbidelli and James Nash – were both scoreless. The Italian seemed on the way to secure a comfortable win when a power steering failure resulted in a dramatic incident that involved his own teammate Alain Menu. As for Nash, he was first slowed down by engine misfire and then hit by another car.
Door-to-door fights resulted in a number of contacts and clashes that eliminated or slowed down some of the top players such as Jordi Oriola, Borković and Vernay.
Attila Tassi and Carlotta Fedeli managed to finish in eighth and tenth as they both scored their first points in the championship.
After Race 1, Pepe Oriola is leading the championship with a 20-point margin, while Comini moved up to second, one point ahead of Morbidelli and four ahead of Nash.
The second race will kick off at 15:30 local time.

Key facts
Start – Morbidelli takes the best start ahead of Comini, Kajaia and Pepe Oriola who nearly stalled the engine
Lap 1 – Comini tries to overtake Morbidelli on the outside line at the Tosa, but to no avail
Lap 2 – Kajaia defends third place from P. Oriola; Nash drops with his rear bumper hanging loose
Lap 3 – Kajaia struggles to keep P. Oriola behind; Grachev is fifth right behind them
Lap 4 – P. Oriola tries an overtaking move but drives wide at Rivazza 2 and drops from fourth to fifth
Lap 5 – Morbidelli struggles with power-steering problems, slows down before the Variante Alta and is hit by Menu; they both are out of the race
Lap 6 – Comini is now leading from Kajaia, P. Oriola and Grachev
Lap 7 – the safety car is deployed to recover Menu’s car
Lap 8 – the race resumes and P. Oriola manages to steal second from Kajaia
Lap 9 – Homola and J. Oriola make contact and the latter retires
Lap 10 – P. Oriola sets fastest lap and chases Comini
Lap 11 – Grachev makes a mistake and drops from fourth to ninth
Lap 12 – Genè defends fourth place from Afanasyev, Borković and Vernay
Lap 13 – Gené also makes a mistake and drops to seventh; Borković and Vernay have a tough fight for fifth, they make contact at Rivazza 1 and Borković spins off onto the gravel
Lap 14 – Comini wins from P. Oriola and Kajaia; Afanasyev finishes fourth ahead of Homola, Vernay and Gené