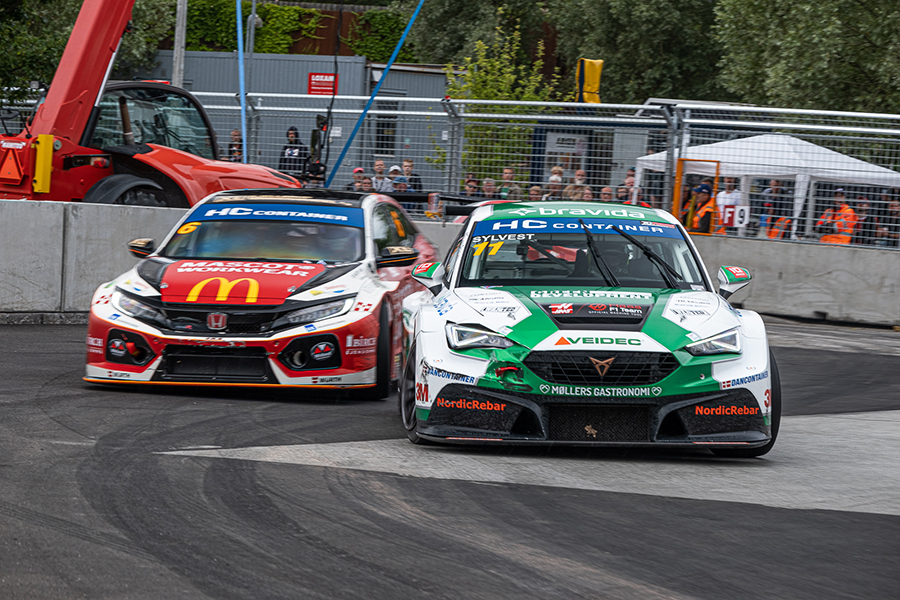 Sylvest beats Halder by 2 victories to 1 in Copenhagen

TCR Denmark was once again part of the Copenhagen Historic Grand Prix on the street circuit around Bellahøj Park. The three races held over the weekend delivered a win for Mike Halder and a pair of victories for Nicolai Sylvest. All three races, however, were disrupted by the safety car.

Race 1 - Halder was on pole after championship leader Kasper H. Jensen was dropped to fifth on the grid by a track limit penalty. Halder made a good start and led the field while Jensen gained three places and was second by the end of the first lap, just ahead of Sylvest who had started from P4. The safety car was deployed after the Alfa Romeo of Kristian Moe Sætheren stopped with flames emerging from the engine. When racing resumed, there was a furious three-way battle for the podium places, with Sylvest passing Jensen when the Honda driver tried to attack Halder for the lead. Sylvest briefly nosed ahead of Halder on the penultimate lap but had to brake to avoid hitting the wall and that allowed Jensen to retake second.

Race 2 – Under a light rain the Hyundai of Philip Lindberg started from pole, but Jensen again made up a couple of places after starting from P5. The Honda of Anton Bergström stopped on track with broken suspension and the safety car was called into action, by which time Sylvest and Jensen had both passed pole-sitter Lindberg. Racing resumed in lap 8, with Halder soon passing Gustav Birch for P4. That became P3 when Lindberg stopped to serve a penalty. When the CUPRA of Lars Højris half-spun and hit the wall, the race finished behind the safety car with Sylvest taking the win ahead of Jensen and Halder.

Race 3 – Halder was once again on pole ahead of Sylvest, Jensen and Birch. Sylvest made a better start from P2 than Halder and took the lead, but an incident involving the Audi of Allan Kristensen and Højris saw the latter’s CUPRA spun into the wall. That meant the safety car made another appearance. Racing resumed in lap 4 with less than ten minutes remaining, but the safety car’s withdrawal coincided with a heavy spell of rain. Two laps later, Jensen passed Halder for second and set off in pursuit of the race leader, but the worsening weather conditions meant a final deployment of the safety car and the chequered flag was shown after nine laps. The podium was a repeat of the Race 2 result, with Sylvest taking his second successive win and Jensen scoring a hat-trick of second places over the weekend.

Jensen is still leading the standings, 37 points clear of Halder, with Sylvest only two further points behind.

The next event will take place at Jyllandsringen on 27/28 August.