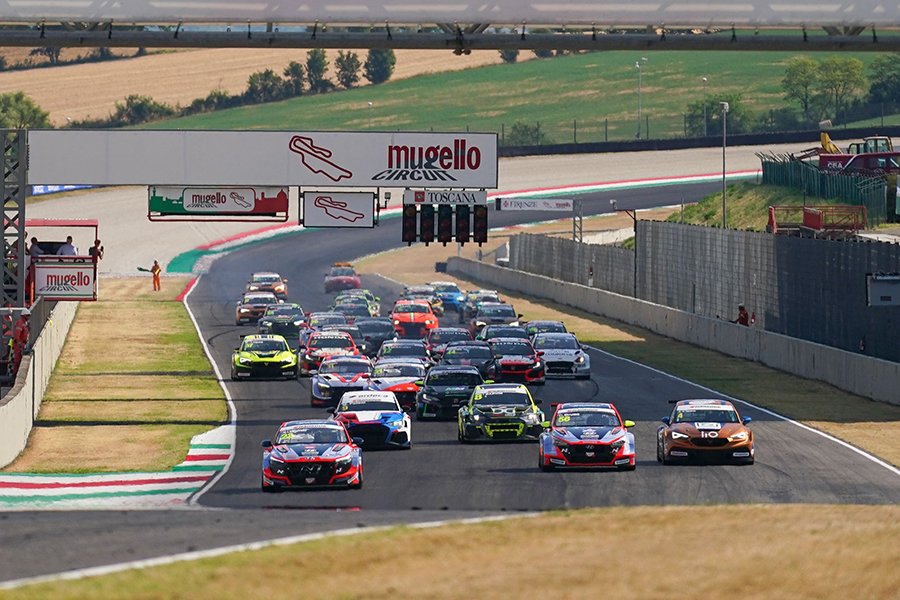 Tavano and Langeveld share wins in TCR Italy at Mugello

Salvatore Tavano and Niels Langeveld were victorious in TCR Italy’s races at Mugello, and look set to deliver a two-way fight for the title in the two remaining events.

In Race 1, Langeveld suffered from a flat front tyre while he was leading with a comfortable margin and Tavano inherited an unexpected victory. The Dutchman made up for the disappointment in Race 2 that he won thanks to a mistake of the uncatchable leader Denis Babuin who mistook the yellow flag for a full-course-yellow and slowed down. Tavano leads the standings by 46 points over Langeveld, with 190 points still at stake, while Kevin Ceccon lies third a further 32 points adrift.

The pole sitter Langeveld led at the start fo the first race, while his teammate Cesare Brusa moved slowly from P2 and lost one place to Tavano who was fourth on the grid; Babuin and Matteo Poloni followed in fourth and fifth. In lap 3, Ceccon overtook Poloni, moving into P4, while Carlo Tamburini served a drive-through for jump start.

Langeveld pulled away, while Ceccon passed Babuin for P3 in lap 6 after they made contact. Then Ceccon put the pressure on Brusa, but the race control ordered him to hand the fourth place back to Babuin. In lap 9, Langeveld pitted with a flat front-tyre and Tavano inherited the lead. In lap 10, Ceccon and Babuin made contact once again, with Babuin dropping to fifth behind Michele Imberti. Ceccon then advanced to second passing Brusa in lap 13. Tavano took his third win of the season from Ceccon and Brusa, but Ceccon was given a 10-second penalty for his second collision with Babuin and dropped to fifth, while Imberti was promoted to third.

Tamburini and Damiano Reduzzi shared the front row of the grid for Race 2; Tamburini had a good reflex at the start, leading from Babuin, Reduzzi, Tavano and Langeveld, while Ceccon dropped from P3 on the grid to seventh. During the opening lap Babuin and Reduzzi passed Tamburini moving into first and second, while Langeveld and Ceccon overtook Tavano climbing to fourth and fifth. In lap 3, Langeveld passed Tamburini for P3; the latter dropped further behind Ceccon, Tavano and Brusa. The safety car was deployed in lap 7 to recover Nicola Guida’s CUPRA and Francesco Savoia’s Audi. Racing resumed in lap 9, Langeveld passed Reduzzi for second, while Tavano put the pressure on Ceccon, fighting for P4. In lap 9, Reduzzi went wide and dropped to eighth, which promoted Ceccon and Tavano to third and fourth. Up front, Babuin seemed uncatchable, but in lap 12 he slowed and was passed by Langeveld and Ceccon; this is the way they finished, with Langeveld the winner ahead of Ceccon, Babuin and Tavano. However, after the race, Ceccon was hit by another 10-second penalty for making contact with Reduzzi and dropped to eighth, with Tavano who was gifted another podium result.

The championship will resume at Imola, September 2/4.