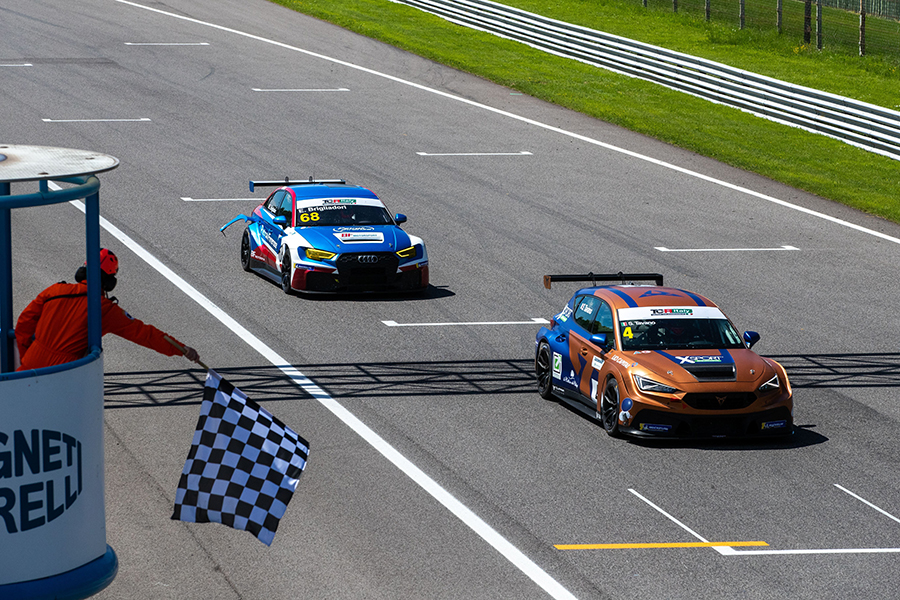 Tavano repeats himself at Monza and wins Race 2

Salvatore Tavano claimed another victory in TCR Italy’s Race 2 at Monza that was disrupted by three safety car periods. After winning yesterday’s first race in the wet, the reigning champion was able to repeat himself under the Sunday sun, starting from P6 of the top-eight reversed grid. Just like in Race 1, Eric Brigliadori and Kevin Ceccon joined him on the podium.
Pole sitter Mattias Vahtel dropped back right after the start with his ALM Motorsport Honda Civic, and so Antti Buri took the lead but only for a few hundred metres before Kevin Ceccon overtook him in the opening lap. The safety car came in for the first time after Giorgio Fantilli beached his CUPRA DSG at Lesmo. The ranking behind the SC was Ceccon, Jonathan Giacon, Buri, Vahtel and Igor Stefanovski.
In lap 3, the safety car pulled out, Ceccon had a good restart and was able to keep the first position. Behind him Buri launched his attack on Giacon who had to keep his eyes on the mirror to control Vahtel. The Estonian youngster found a gap to pass both Giacon and Buri, moving into P3 at the end of lap 5. This didn’t last long, as Tavano took the offensive in lap 6, passing Buri, Vahtel and Giacon to climb to second.
There was another thrilling battle in the middle of the field between Stefanovski, Nicola Baldan and Evgenii Leonov for the seventh position.
Tavano closed in on Ceccon and eventually passed him on the pit straight at the end of lap 7. One lap later the second safety car intervention was caused by Leonov whose CUPRA Leon Competitción stopped on the gravel of the Parabolica after the Russian had clashed with Baldan’s Hyundai.
Racing resumed in lap 11, but once again the safety car was deployed after Stefanovski was punted out at the Roggia by Dušan Kouřil; this resulted in a 25-second post-race penalty that dropped Kouřil from seventh to 18th.
After the third restart, with only two laps to go and Tavano safely in the lead, a tough battle involved Ceccon and Brigliadori; the BF Motorsport’s driver climbed to P2 in lap 13 and then closed in on Tavano only to finish second, less than two tenths behind. Ceccon retained the third place ahead of Buri who was then dropped to ninth by a 5-second penalty for cutting the chicane after the start. This promoted Vahtel to fourth and Michele Imberti to fifth.
The championship will resume at Misano on June 4/6.