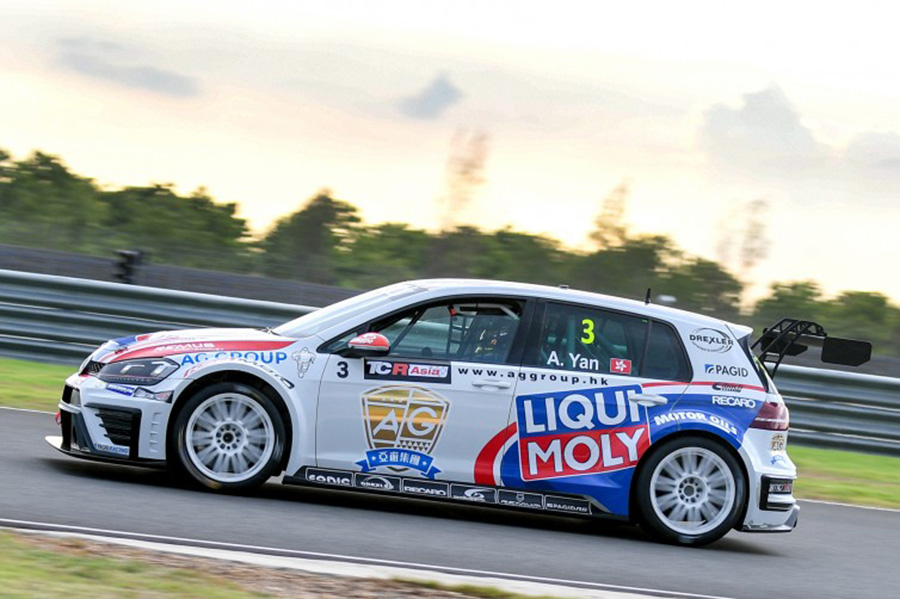 The second event of the TCR Asia took place in Thailand at Buriram’s Chang International Circuit and ended up with a complete triumph of Andy Yan.
The Liqui Moly Team Engstler driver and his Volkswagen Golf Gti claimed pole position on Saturday and then won both races on Sunday, the third and fourth rounds of the series. Yan also benefited from the technical issues that plagued the Team Thailand Honda Civic of local hero Tin Sritrai – the leader of the championship after the first event – and jumped on top of the standings with nearly double points compared to his closest competitors, Henry Ho (Champ Motorsport Honda Civic) and Kevin Tse (TeamWork Volkswagen Golf).

The event had a bad start for Sritrai since Qualifying, as his Honda was sidelined by an engine failure. Jack Lemvard (Vattana Motorsport SEAT León) – one of the four TCR Thailand competitors who joined the field – was fastest in the first session, disturbed by a light rain. However, in the second session Yan was able to set the fastest lap (1:45.141) that granted him the pole ahead of Lemvard (1:45.442) who had an even faster lap disallowed for trespassing track limits.

On Sunday the sun was shining and Lemvard took the lead at the start of Race 1, followed by Yan and Kevin Tse. The three offered the fans a close fight, with Lemvard who was able to close all the gaps for the first four laps; then on lap 5 Yan took the lead and began to create a gap. Eventually he crossed the line 2.7 seconds ahead of Lemvard, while Narasak Ittiritpong (Vattana Motorsport Honda Civic) claimed the last spot on the podium. Sritrai’s car – fitted with a new engine – had retired early in the race.

Terence Tse (RoadStar Racing SEAT León) was on pole on the reverse grid for Race 2, but once again Lemvard took a great start and after making contacts with Henry Ho and Terence Tse jumped into the lead chased by Yan and Kevin Tse. The three cars were running abreast and at the beginning of lap 2, Lemvard drove wide at Turn 2 and dropped, while Kevin Tse took the lead. A few moments later Yan overtook Kevin Tse and pulled away. In the meanwhile Sritrai had moved up to third and was chasing Kevin Tse, with Henry Ho following closely. Once again Sritrai’s Honda suffered from a technical issue and the unlucky Thai was forced to retire. Yan increased his margin and scored his second victory of the day, from Kevin Tse and Henry Ho.

After the first two race meetings, Yan leads the standings with 94 points ahead of Kevin Tse and Henry Ho (both 52) and Sritrai (42).
The series will resume on August 20 and 21 in China, at Shanghai International Circuit, for rounds five and six.