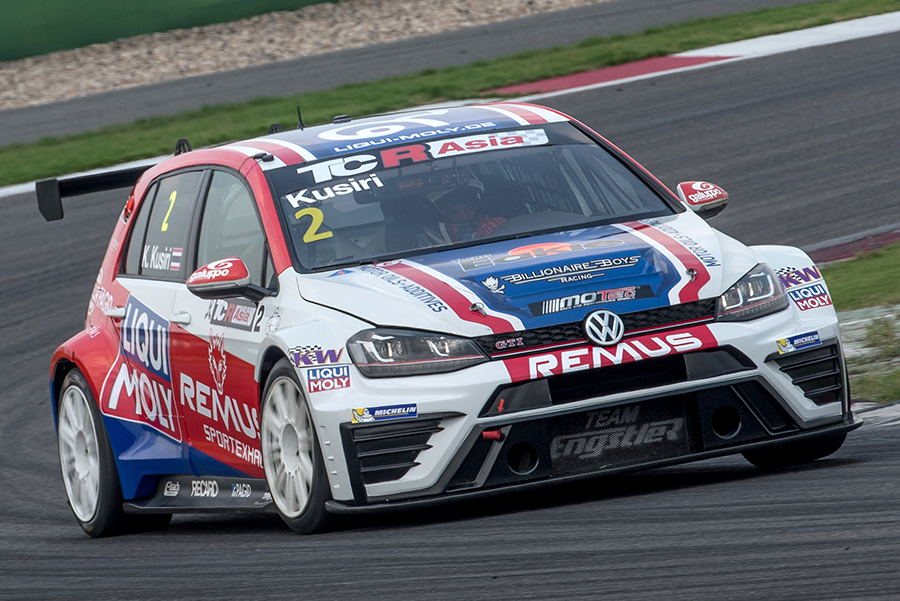 TCR Asia and TCR China raced together at the Shanghai International Circuit, where Kantadhee Kusiri and Diego Moran finished 1-2 for the Liqui Moly Team Engstler in the first race, while NewFaster’s Huang Chu Han emerged as the TCR China winner.
At the start, Andy Yan (NewFaster Audi RS3 LMS) took the lead from pole sitter Kusiri (VW Golf); behind them a couple of incidents between turns 1 and 2 eliminated four cars, including Eric Kwong’s SEAT León. Among the cars involved was the R Engineering Honda Civic of Lai Wee Sing, the leader of TCR Asia standings, who was forced to pit for repairs and rejoined after three laps.
In the early stages, Yan and Kusiri delivered a thrilling fight for the lead; the Thai driver overtook the Hong Konger on lap 2 and from lap 4 onwards began to pull away.
The pace of Yan’s Audi began to fade, which forced him to hand the second position to Moran on lap 6 and the third to his own teammate Huang on lap 8.
On the last lap, Yan even lost fourth to Tin Sritrai (Team Thailand Honda Civic) who finished third in TCR Asia, while Alex Fung (TeamWork Motorsport Volkswagen) was classified sixth overall and completed the TCR China podium.