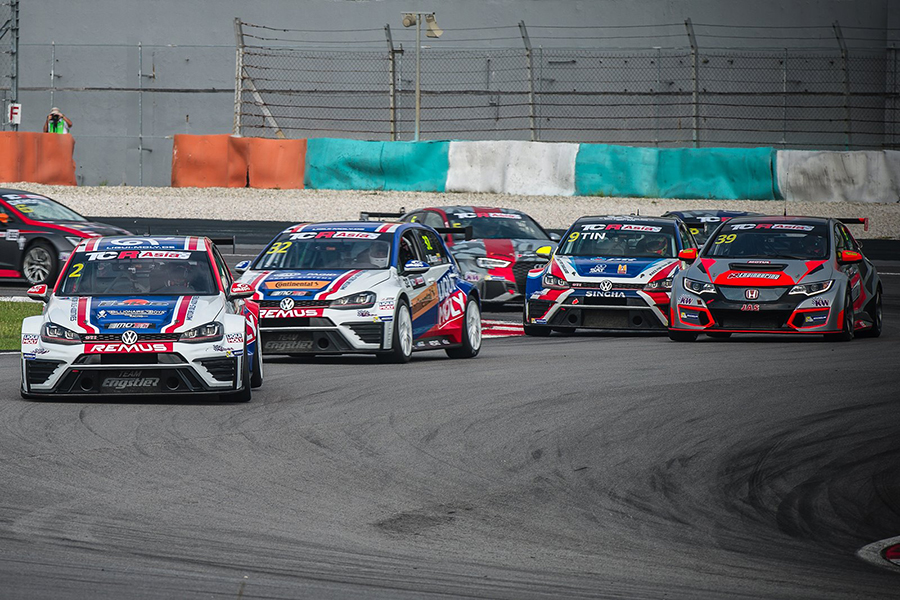 The Volkswagen Golf GTi cars were the dominant force in the TCR Asia opening event at Sepang International Circuit.
Liqui Moly Team Engstler’s teammates Kantadhee Kusiri and Diego Moran shared victories and the latter took the lead in the championship standings as Kusiri was involved in a collision during the second race.
Team Thailand’s Tin Sritrai, also at the wheel of a Golf, finished twice on the podium, while the Honda Civic and Audi SR3 LMS cars struggled to stay on the leaders’ pace.

Race 1 – Kusiri opened hostilities with a comfortable win ahead of teammate Moran and fellow countryman Sritrai.
At the start Eric Kwong’s SEAT León crashed into the pit wall after making contact with Tong Siu Kai’s Audi, an incident that prompted the safety car. The race resumed on lap 5, with Kusiri leading from Moran, while Lai Wee Sing and Sritrai were in a close fight for the third position. Eventually on lap 11 of 13, Sritrai was able to overtake Lai’s Honda to complete a 1-2-3 finish for the Volkswagen Golf cars.
“It was a clean race and I was able to create a gap,”the winner said.

Race 2 – Kwong’s SEAT could not be repaired in time after his Race 1 shunt, which helped the Audi cars of Tong Siu Kau and Jasper Thong to the front row of the top-six reverse grid. Thong stalled at the start and dropped to last, while Moran jumped from third and took the lead from Sritrai and Tong.
Soon Kusiri overtook Tong and began chasing Sritrai. They made contact a first time on lap 3; then on lap 4 Kusiri tried to outbrake Sritrai at T15, their cars clashed and the winner of Race 1 was forced into pit for repair, losing two laps before rejoining.
Sritrai managed to close the gap from Moran and on the last lap he tried to find a gap and pass him, but at no avail. However, after the end of the race Sritrai was demoted from second to fifth by a 30-second penalty he was given for his collision with Kusiri. This promoted R Engineering teammates Lai and Mohamed Kaathir to second and third. A delighted Moran said: “I took a very good start and then I pushed on every lap, but in the end my tyres were losing grip.”

The series’ second race meeting will take place in China, at the Zhuhai International Circuit, on 22/23 April.