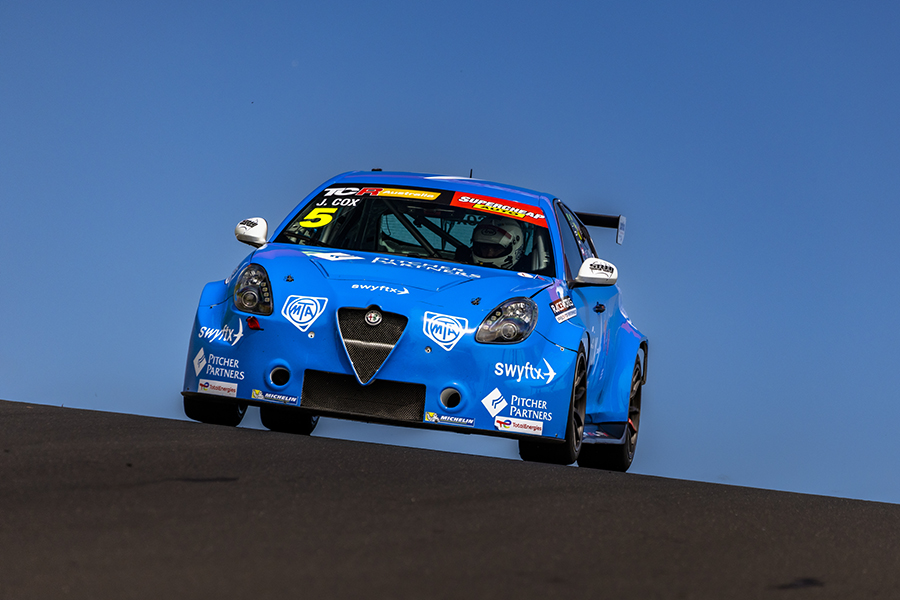 The TCR Australia championship has resumed at Bathurst for the season finale after a seven-month break imposed by the COVID-19 pandemic.
The last event has gone underway this morning with two practice sessions that were both topped by Jordan Cox and his Garry Rogers Motorsport Alfa Romeo Giulietta Veloce. Cox’s time of 2:15.2422 was 0.8 seconds faster than his teammate Michael Caruso, while the Peugeot 308 of Ben Bargwanna completed the top-three one further tenth adrift.
There were three red flag-disruptions during the first practice. TCR Australia debutant Keegan Brain was first to come unstuck as he hit the wall in his Purple Sector Volkswagen Golf GTI, then Chaz Mostert made contact with the wall at Reid Park after sliding on oil and finally Zac Soutar’s Honda Civic ended in the sand trap at The Chase. Both Brain and Mostert missed the second practice.
Mostert is the leader of the standings in his Melbourne Performance Centre Audi RS 3 LMS, having built a margin of 106 points over his teammate Luke King. With 132 points on offer in the final event, Mostert is one step away from clinching the title, as the only two other drivers who are kept in contention by the numbers are the HMO Customer Racing pair of Josh Buchan and Nathan Morcom with their Hyundai i30 N cars who are currently 117 and 125 points behind.
The three races will be run over the distance of 21 laps or 130 km, one each on Wednesday, Friday and Saturday.