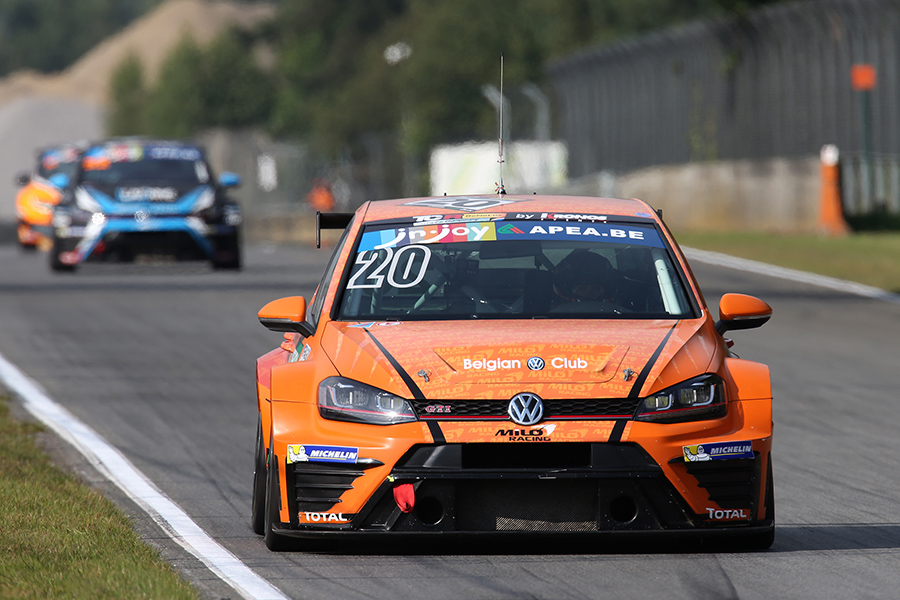 Vincent Radermecker emerged as the winner in the first two TCR Benelux sprint races at Zolder. The Milo Racing driver and his Volkswagen Golf took the lead in the early stages of the first race and retained it until the end of the second one.

Race 1 – At the start, Sam Dejonghe (RACB National Team SEAT León) sprinted from pole position ahead of Radermecker, Benjamin Lessenes (Boutsen Ginion Racing Honda Civic), Edouard Mondron (Delahaye Racing SEAT León) and Maxime Potty (Team WRT Volkswagen Golf). During the first lap, Potty and Mondron made contact and the latter dropped at the back of the field.
Radermecker overtook Dejonghe for the lead on lap 3, while Potty and Lessenes were fighting for third. On lap 4 they clashed at the chicane, Potty went off and re-joined at the back.
Didier van Dalen (Delahaye Racing Volkswagen Golf) was elbowing his way through the field and climbed to third behind Lessenes by lap 7; on lap 8 van Dalen moved up to second when Lessenes was given a drive-through for the incident with Potty. Lessenes could not re-join due to a technical failure that prevented him also from starting in Race 2.
Radermecker crossed the line first ahead of van Dalen, Dejonghe, Frédéric Caprasse (DG Sport Compétition Opel Astra) and Romain De Leval (Delahaye Racing Volkswagen Golf) who managed to beat BTCC guest star Matthew Neal (Boutsen Ginion Racing Honda Civic) by inches.

Race 2 – After the field was re-grouped by the safety car, Radermecker took the lead at the start from van Dalen. Caprasse and De Leval clashed in the opening lap and the latter stopped onto the gravel trap.
Mondron, Dejonghe, Potty and Neal were in a tough fight for third; on lap 6 Potty tried to overtake Mondron, damaged the front of his own car and retired. Caprasse joined the fight and, lap after lap overtook Neal, Dejonghe and Mondron, climbing up to third.
On lap 10, van Dalen lost his second place when his Golf was stopped by a technical failure. Radermecker claimed his second victory ahead of Caprasse and Mondron.
Races 3 and 4 will start at 14:00 with Pierre-Yves Corthals on pole position in the Opel he shares with Caprasse.