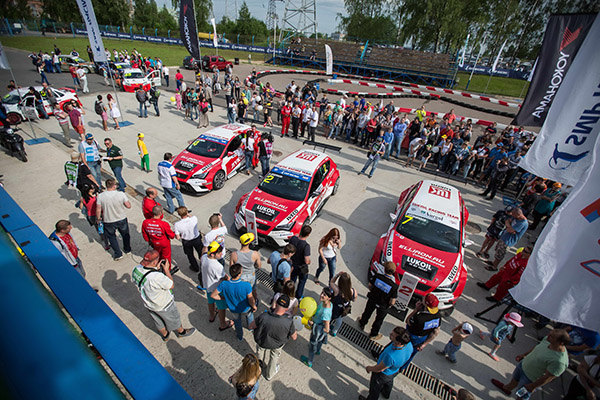 Three SEAT León cars in TCR specs run by the Lukoil Racing Team dominated the second event of the Russian Circuit Racing Series at the Smolensk Ring.
The Lukoil Racing Team trio filled the first three spots of the grid after qualifying, with Rustam Akiniyazov on pole position ahead of team-mates Aleksey Dudukalo and Roman Golikov.
The first race took place on Saturday afternoon, under a light rain and the three SEAT drivers led from lights to flag: Dudukalo claimed victory from Golikov and Akiniyazov.
The sun was shining on Sunday for the second race and Vitaly Larionov’s BMW 320i Super 2000 led for most of the 18 laps, but eventually he could not keep at bay the three SEAT cars that filled the podium once again with Dudukalo 1st, Akiniyazov 2nd and Golikov 3rd.
The next race meeting of the RCRS will take place at Sochi Autodrom on June 20 and 21, sharing the event with the TCR International Series.