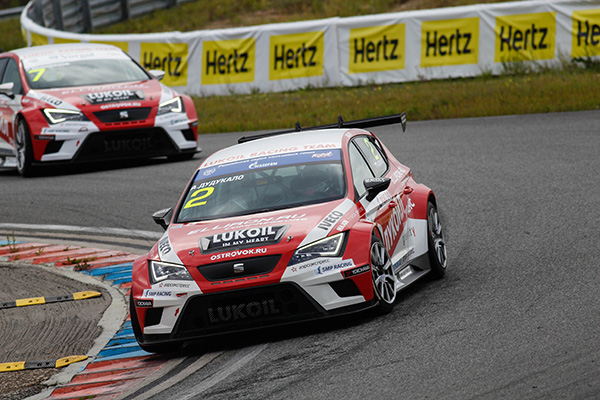 The three TCR cars run by the Lukoil Racing Team continue their domination in the Russian Circuit Racing Series.
The championship’s fourth race meeting took place last weekend at the Kazan Ring, where Rustam Akiniyazov and Aleksey Dudukalo shared victory in the two races of the 2-litre class.
On Saturday, the three SEAT León cars of Akiniyazov, Dudukalo and Roman Golikov finished 1-2-3 in the first race, benefiting from a mistake of Vitaly Larionov, who spun off on the wet track in his Super 2000 BMW 320 TC.
Race 2 was held on Sunday in dry conditions. Dudukalo emerged as the winner ahead of Akiniyazov after a safety car period; Larionov beat Golikov for the third place.
Dudukalo has further stretched is advantage in the standings of the Touring class. He has collected 184 points so far, against Akiniyazov’s 119 and Larionov’s 114.