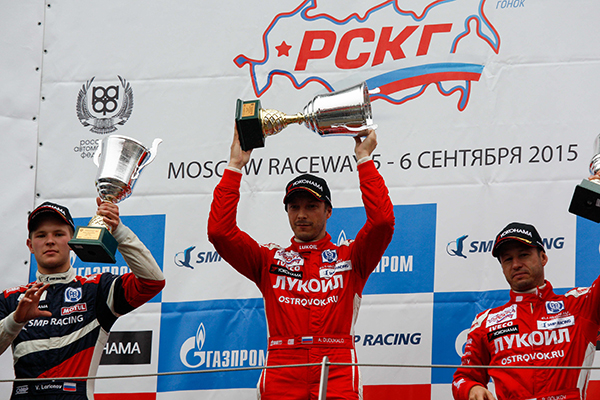 Aleksey Dudukalo became the first driver to be crowned champion in a TCR car.
Last weekend, at the wheel of his Lukoil Racing SEAT León, Dudukalo scored the maximum points in the sixth event of the Russian Circuit Racing Series that took place at the Moscow Raceway.
Winning both races, Dudukalo stretched his leading margin in the classification of the Touring class to 120 points, a gap that cannot be filled with only one event left in the calendar.
The first race, on Saturday, took place under a pouring rain. Despite a few technical issues, Dudukalo was able to chase Vitaly Larionov’s BMW 320si and win the race by a close margin.
The sun was shining on Sunday, when the second race started. Once again Larionov led in the early stages, but eventually Dudukalo overtook him and claimed a second victory.
Dudukalo’s team-mate Roman Golikov finished third in both races; he still hopes to claim second position in the championship as he lies only eight points behind Larionov.