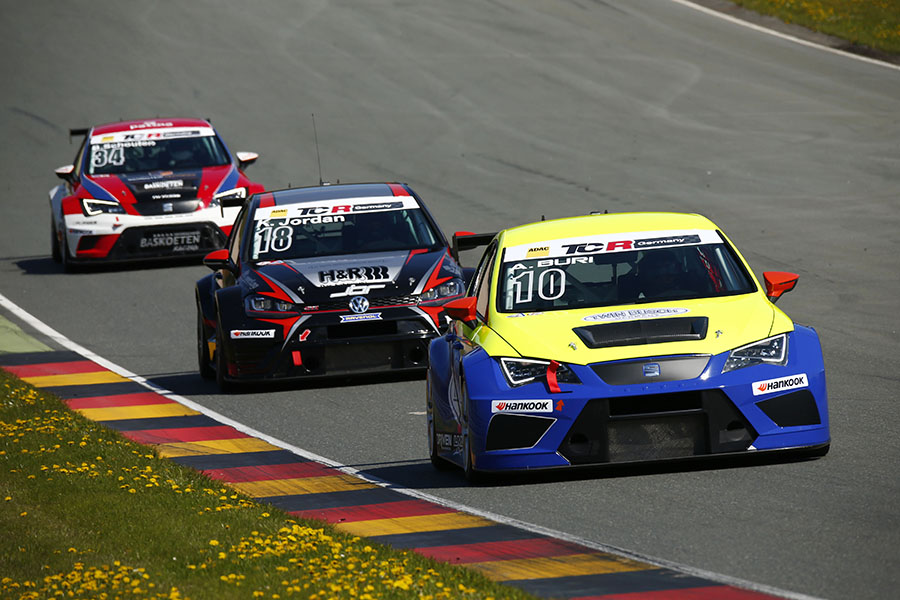 In the second race at the Sachsenring, Antti Buri and his SEAT León of LMS Racing took their maiden victory in the ADAC TCR Germany. The young Finn took the leadership on lap 3 and was able to defend his position from the recovering Volkswagen Golf Gti of Benjamin Leuchter.
The race provided plenty of overtaking manoeuvres, swapping positions and clashes, with groups of cars fighting door-to-door, including a four-way battle for the lead between Buri’s SEAT, the two VW cars of Leuchter and Tim Zimmermann and the Honda Civic of Steve Kirsch.
At the start René Münnich sprinted from the pole on the top-ten reverse grid and took the lead from Mario Dablander, Jürgen Schmarl and Buri, while Kay Jordan (third on the grid) stalled the engine.
During the opening lap Buri and Leuchter moved up to third and fourth ahead of Schmarl. On lap 2 Buri overtook Dablander for second and, on the following lap, he took the lead from Münnich. During the next two laps Münnich was further demoted to fifth from Leuchter, Tim Zimmermann and Steve Kirsch.
The race was disrupted by the safety car on lap 7 to recover Pascal Eberle’s SEAT that was stranded onto the gravel after a collision with Jordan’s Volkswagen. After two laps of safety car, the race was red-flagged for cleaning the track. It eventually resumed behind the safety car with ten minutes left on the clock.
On lap 12, yesterday’s Race 1 winner Harald Proczyk climbed from seventh to fifth, passing Josh Files and Münnich.
The last lap saw Leuchter closely chasing Buri, while Zimmermann was defending the third place from Kirsch and Proczyk. Eventually Buri won with a small margin on Leuchter with Zimmermann third from Kirsch and Proczyk; on the finish line Files stole sixth from Dablander.
Prozcyk retained the championship lead with 70 points, with Files (63) second and Leuchter (58) third.
The championship will resume on 18 and 19 June at Oschersleben for rounds 5 and 6 that will be in the frame of the TCR International Series event.