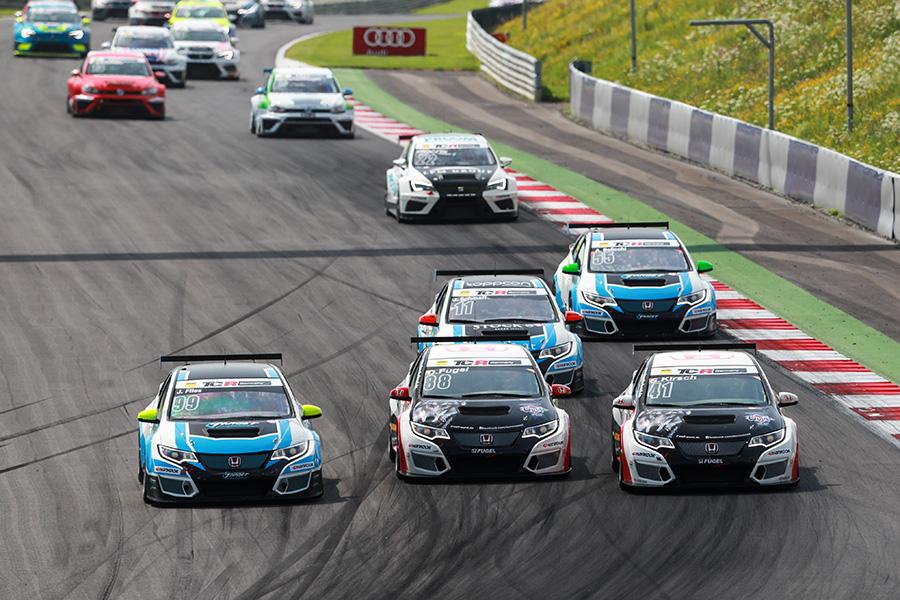 Josh Files (Target Competition Honda Civic) and Steve Kirsch (ADAC Sachsen Honda Civic) claimed one victory apiece in the fourth event of TCR Germany at the Red Bull Ring in Austria. However, they both failed to score once: Kirsch was stopped by a technical problem in Race 1 and Files was involved in a crash at the start of Race 2. This helped local hero Harald Proczyk (HP Racing SEAT León) to retain second position in the standings, only 6 points behind Files and 24 ahead of Kirsch.

Race 1: Files sprinted from the seventh spot of the grid and took the lead ahead of pole sitter Kirsch. Andrea Belicchi and Jürgen Schmarl (both Target Competition Honda Civic) followed in third and fourth, making a Honda quartet on top of the field, while Proczyk overtook Dominik Fugel (ADAC Sachsen Honda Civic) for fifth. Kirsch was chasing Files closely, however, on lap 7 he suddenly slowed down and retired due to a technical issue. This left Files in the lead, with his back protected by his own teammates Belicchi and Schmarl.
The field was re-packed by the safety car on lap 11 eleven, while the marshals worked to remove Pascal Eberle’s SEAT that had crashed at the last turn. When the race resumed with only two laps to go, Proczyk made an attempt to steal third place from Schmarl, but Fugel benefited from the manoeuvre and grabbed third behind Files and Belicchi.

Race 2: Benjamin Leuchter (Racing One Volkswagen Golf) was the fastest to start from the pole on the reverse grid; Antti Buri (LMS Racing SEAT León) stalled his engine on the second spot of the grid, the drivers behind steered in avoidance and four Honda cars came together: Files and Fugel retired, while Belicchi and Schmarl managed to rejoin.
The safety car was deployed to remove Fugel’s car and the race resumed on lap 7, with Leuchter in the lead, chased by Proczyk and Kirsch. On lap 12, both Proczyk and Kirsch were able to overtake the leader, who dropped further behind and eventually made a mistake and retired.
On lap 13, Kirsch took the lead from Proczyk and went to claim his first victory ahead of the Austrian; Buri finished third beating Mario Dablander (Wolf-Power Racing SEAT León) and Tom Lautenschlager (Liqui Moly Team Engstler Volkswagen Golf).

The series will resume in two weeks at the Nürburgring (August 6 and 7) for rounds 9 and 10.