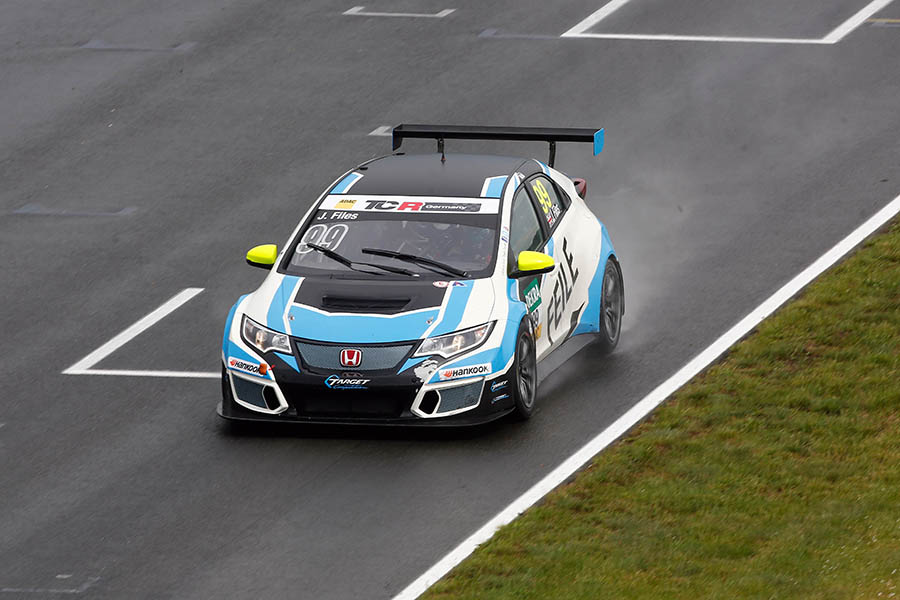 Josh Files claimed his third victory of the season, the first after Target Competition switched from SEAT to Honda cars. The Briton emerged as the winner at the end of a thrilling race that ended with a six-car fight for the lead.
Everything was decided in the last lap, when Files and Bas Schouten pipped Tim Zimmermann who had led for most of the race after Antti Buri has been slowed down by electronics issues. With these results, Files regained the championship lead, five points ahead of Harald Proczyk.
The first lap was full of action, also because it began to rain while the drivers were on slicks; Buri took the lead from Zimmermann, Proczyk, Lautehschlager and Dablander. A mid-field incident involved Schamrl, Leuchter and Eberle; the latter’s car stopped in the middle of the track and forced the race director to deploy the safety car.
Soon after the race resumed, the leader Buri slowed down for a while and rejoined in 11th position. Zimmermann inherited the first place ahead of Files, Kirsch, Proczyk, Halder and Schouten.
The safety car was prompted again on lap 9 after Jordan’s car got stranded onto the gravel trap. When the race resumed Files and Kirsch made contact while fighting for second; Kirsch got the worst of it and retired.
Zimmermann was defending the lead from Files, Proczyk, Schouten, Buri and Halder; the six cars were covered by less than two seconds. On the last lap Files and Schouten managed to overtake Zimmermann and crossed the line in first and second, with Halder and Proczyk following in fourth and fifth.
The championship will resume on 23 and 24 July at the Red Bull Ring, in Austria, for rounds 7 and 8.