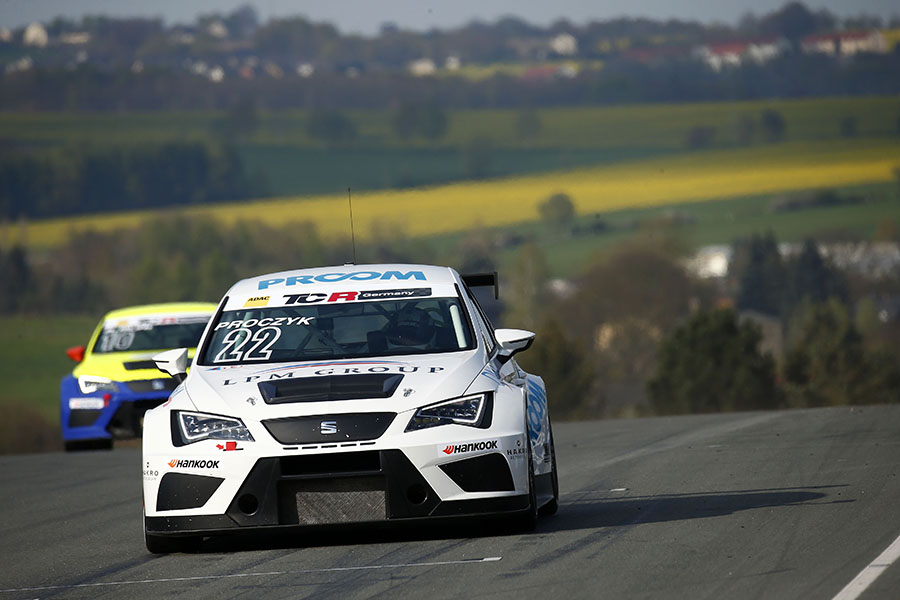 HP Racing’s Harald Proczyk claimed a lights-to-flag victory in the third round of the ADAC TCR Germany at the Sachsenring. After setting pole position in this morning’s qualifying, the Austrian driver took the best start and led for the whole 20-lap race.
Behind him, drama hit the championship leader, Target Competition’s Josh Files, who drove very wide off the track and dropped from second to sixth. Soon afterwards, Files made contact with his own teammate Jürgen Schmarl whose car remained beached onto the gravel trap prompting the safety car intervention. Mario Dablander was also involved in the incident and rejoined at the back of the field, while Files pitted and retired.
The race resumed on lap 5, with Proczyk followed by Antti Buri and Steve Kirsch; on the same lap, Bas Schouten lost fifth place to Mike Halder and sixth to Pascal Eberle.
The positions seemed frozen until Kirsch made a mistake in lap 16, handing third to Tim Zimmermann and fourth to Halder. However, Kirsch was able to retake fourth from Halder on the following lap. Schouten provided the last thrill, overtaking Eberle for sixth.
Proczyk won from Buri in a SEAT 1-2, while Zimmermann’s Volkswagen claimed the last podium position and Kirsch’s Honda was classified fourth.
Prozcyk took also the championship lead with 60 points, five ahead of Files.
The second race will start tomorrow at 10:25.