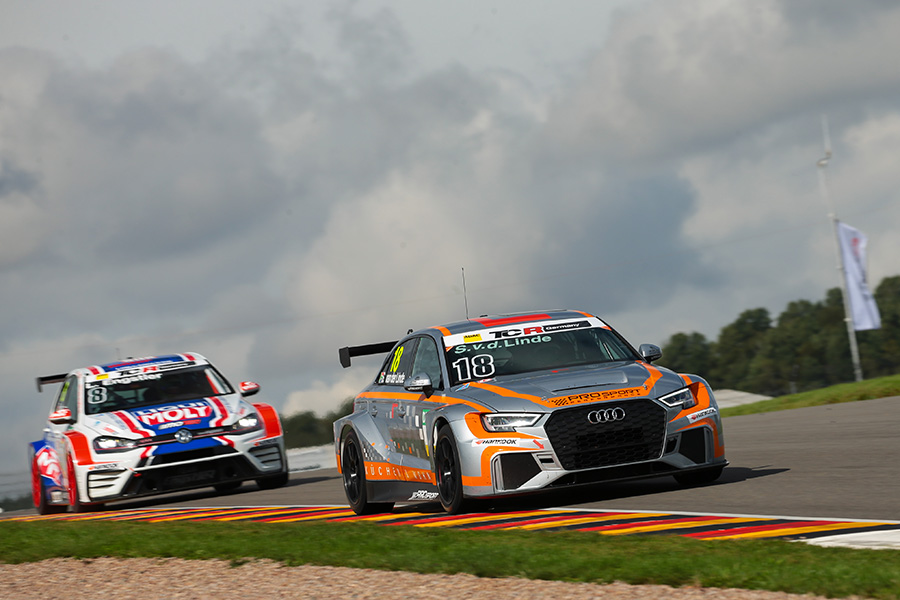 Sheldon van der Linde, driving an Audi RS3 LMS, took a commanding maiden victory in the first of the two TCR Germany races at the Sachsenring. Starting from third on the grid, the South African made a superb start, overtaking pole-sitter Luca Engstler’s Volkswagen Golf going into Turn 1 and then diving past the SEAT of Harald Proczyk for the lead in the final corner of the opening lap. After that, van der Linde was never really threatened, despite a brief Safety Car period while the Honda of Steve Kirsch was recovered. The Audi driver managed the restart masterfully and then kept up his pace to eventually take the chequered flag with an advantage of over five seconds.
The remainder of the top five places were far more keenly contested. Proczyk battled with Mike Halder’s SEAT for much of the race, while Luca Engstler recovered from his poor start to fight with Halder in the race’s closing stages. Contact between Engstler and Kirsch on lap 2 resulted in the latter in the gravel and out of the race, while Engstler passed Moritz Oestreich for 4th place on lap 8 of the thirty-minute race.
Series leader Josh Files started from tenth on the grid and steadily worked his way through the field to join the Engstler/Halder scrap over the final few laps. The Target Competition driver was determined to score a decent points haul, however, and so settled for fifth place instead of risking a non-finish by tangling with the two drivers ahead.
The race finished with Proczyk behind van der Linde and Halder rounding off the podium places. Engstler was fourth and Files fifth, with Oestreich, Tim Zimmermann, Antti Buri, Kris Richard and Niels Langeveld completing the top ten.
After the race, Engstler received a 30-second penalty for his incident with Kirsch and dropped from fourth to 19th.
Files’ lead in the series has been cut to 71 points over Halder with van der Linde now a further 13 points adrift. Files could mathematically still win his second successive title after Race 2, but the title battle is almost certain to be decided at the final round at Hockenheim next weekend.

Race 2 at the Sachsenring is scheduled to start on Sunday morning at 10.50.