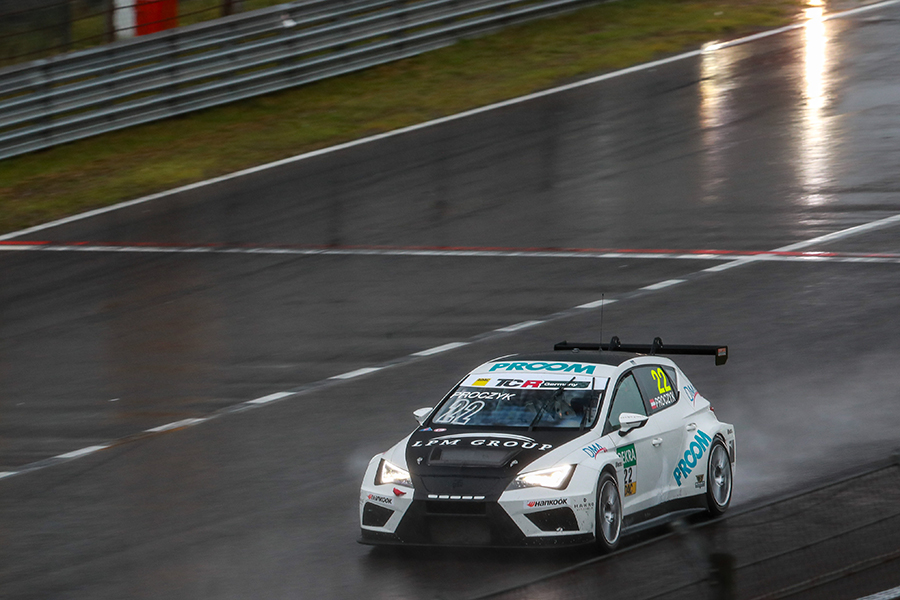 TCR Germany – Victory for Proczyk in a flooded race

Heavy rain was pouring on Circuit Park Zandvoort, providing prohibitive conditions for the ADAC TCR Germany competitors.
A series of incidents on the flooded track prompted two safety car interventions and eventually the red flag.
Harald Proczyk (HP Motorsport SEAT León) won the race at the start, as he took the lead sprinting from the second spot on the reverse grid. The winner of Saturday’s Race 1, Antti Buri (LMS Racing SEAT León) claimed the second position overtaking Mike Halder (Liqui Moly Team Engstler SEAT León) during the opening lap.
Then it was chaos. The safety car was deployed the first time at the end of lap one, after Simon Larsson (Target Competition SEAT León) and Dominik Fugel (ADAC Sachsen Honda Civic) got stranded on the gravel trap at the Scheivlak bend.
Immediately as the race resumed, Steve Kirsch (ADAC Sachsen Honda Civic) and Finlay Crocker (VFR Racing Honda Civic) went off at the Tarzan bend and the Khumo bend respectively, which prompted the safety car again.
After the second restart, Crocker went off again at Tarzan and this time the Race Director red-flagged the race five minutes before the end.
The championship leader Josh Files (Target Competition Honda Civic) salvaged a fifth place and saw his leading margin in the standings reduced to 41.5 points ahead of Proczyk. However, with only a possible 55 points still at stake, he has closed in further on the title.

The ADAC TCR Germany will end at the Hockenheimring on October 1 and 2.